Thoughts of the traditional English countryside conjures up images of wild moors, rolling hills and lavish houses. Typically, it is viewed as a space in which only white people interacted. However, recent historical research is demonstrating that people of African descent lived and worked in rural areas of Britain including East Yorkshire.
In the eighteenth century, ‘servant’ simply meant ‘employee’ so, for example, on a farm they would be agricultural labourers and in the home, domestic workers. While today these jobs may be deemed undesirable, in the past when life for ordinary people could be a tremendous struggle, being employed as a servant, particularly within the household, would have been considered an excellent opportunity.  Despite long hours and hard work, it ensured comfortable accommodation, regular sustenance and smart clothing which was a luxury to many working class men and women in Britain.
The history of servants in Hull and East Yorkshire prior to 1750
Between the sixteenth and seventeenth centuries it became fashionable for rich families living in grand houses all over Britain to employ a Black servant as a status symbol. From parish registers and other records, we know that a small number were employed in East Yorkshire during this era. For example, in 1600, Anna described as ‘a negro belonging to Mr Burnet’ is listed in the tax records as a member of the household of Bartholomew Burnett of Hull.  She was recorded as living with the family from 1598 to 1600, but then disappears from the records. Furthermore, in the late seventeenth century, a servant named Cassie, worked for Alderman Richard Barnes. By day he worked in Barnes’ wholesale warehouse before donning a smart livery to serve dinner in the evening.

In the early eighteenth century, Black servant John Scampston, was employed by Sir William St. Quintin, 3rd Baronet of Harpham. The record of his baptism in Rillington in 1720 reveals that he was a ‘Black boy.’[1] Given his age, the era and prestigious position of his master it is possible that Scampton was employed as a decorative page. Sadly, he was buried in 1725, only five years after his baptism.
In the early 1740s, a Black servant was brought to the region from the East Indies by William Draper. After his appointment in 1743, the new Archbishop of York, Thomas Herring, wrote to all the clergymen within his diocese requesting information. In response to a question about whether his parishioners were baptised, Thomas Mease, curate at Beswick wrote:

‘I know of none who come to church in this place that are not baptised, except one call’d Beswick, a Black, who is about twenty years of age; he was in the East Indies, sold to Mr William Draper, Esq of this Town. He is a Youth of no learning, and but of very slender capacity.’[2]

Three years after this correspondence, on 30 November 1746, Beswick was baptised in Kilnwick and given the Christian name John.[3]
Black Servants in Boynton and Beverley
A case study of Boynton demonstrates that three Black servants lived and worked in the village during the eighteenth century. In 1746, Richard Pompey, a ‘grown-up person’ was baptised at Boynton.  There is no mention of his race in the parish records, but Pompey was a name typically given to many Black servants. In addition, adult baptisms were very rare for English men and women, however they were common among newly arrived Africans.[4] Almost two decades later in 1761, John Pomfret, a ‘negro servant to Mr. Knowsley’ the curate of Boynton was also baptised in the village. Furthermore, Peter Horsfield, a footman to Sir George Strickland, married Elizabeth, daughter of the Rev. George Lawson, vicar of Weaverthorpe at Boynton on 25 March 1780.  Their son, one-day-old Henry Horsfield, was baptised at St. Cuthbert's Peaseholm Green in York on 21 December, the same year, it identified his father as ‘a negro’. Additional confirmation that Horsfield was of African descent comes from a letter sent to Boynton Hall from a Mr. Stedman, addressed to ‘Peter the Negro, Servant to Sir George Strickland.’ It read:

I send you a guinea Peter to drink the
health of Sir George and all the Ladies
this very day.
Be a good lad, you have got a good family
to serve; wel serve them honestly and
faithfully with all your heart and soul.
Mind their interest as you would mind
your own and you shall never want.
Give my hearts wel wishes to them all and
in hopes of seeing them all once more.
I am in the most damnable haste
Yours
Jack Stedman.[5]

As well as Boynton, Black servants also lived and worked in Market Weighton and Beverley during the eighteenth century. In 1776, John Denbir ‘a Negro Boy’ was baptised at Market Weighton, where he was also buried in 1777. Two decades later, baptism records show that ‘John Robinson, about 18 years of age, an African servant to Mr. R. Graham…residing in Kell Gate’ was baptised in Beverley Minster in 1796.
Black Servants in Hull and East Yorkshire in the nineteenth century
Men and women of African descent continued to be employed as servants in Hull and East Yorkshire throughout the nineteenth century. Their presence can be found etched into the landscape on gravestones, in newspaper articles and recorded within the pages of the census.
Newspapers
Although, there is very little information about servants of African descent in the local newspapers, the following article featured in the Hull Advertiser and Exchange Gazette on 10 February 1843, (below).[6] While it does not give specific information, and may well be a fictitious account, it is probable that the author based the character on a previous experience or encounter which may have occurred in Hull or East Yorkshire. 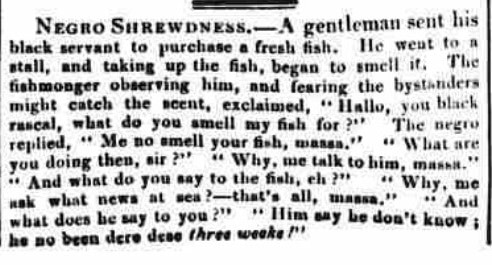 The census
The census has also revealed the names of several potential people of African descent who lived and worked in the region as servants. In 1851, West Indian, agricultural labourer Abram Jones was listed as a servant working for the Brankley family at ‘Rawlston’ (Rolston) and Barbadian Catherine Lakes was the servant for the Cornwall family who lived in Beverley. In addition, Celia Saul who was born in Trinidad and Tobago was recorded as a servant of the Moselys at 15 Whitefriargate in Hull. Thirty years later in 1881, West Indian, Mary Greenwood’s occupation was noted as a servant, although she was classed as the head of the household at 3 Banks Court, Hull. Lastly, the 1901 census revealed that Annie Armbrister was a domestic servant from Saint Kitts working at Manor House in Willerby.
Further research
It is difficult to find the presence of people with African heritage in rural areas, however, this does not mean they did not exist. As demonstrated Black men and women were living and working in East Yorkshire as servants from the seventeenth century. A closer analysis of the country houses listed in the table below may well highlight a larger presence in this region. Where possible the number of servants has been included within the table to give an idea of the size of the house and how many people were employed within the grounds. It is likely that these numbers are conservative as the census data is sometimes illegible, the houses are listed under abbreviated or other names and it is possible that they fluctuated during the years between data collection. However, given the number of servants in the region it is probable that there is a greater Black presence waiting to be uncovered.
Footnotes
[1] Ancestry.com. Yorkshire, England, Extracted Church of England Parish Records [database on-line]. Provo, UT, USA: Ancestry.com Operations Inc, 2001.
[2] Sidney Leslie Ollard and Philip Charles Walker, Archbishop Herring’s Visitation Returns, 1743, vol. 1 (Cambridge: Cambridge University Press, 1928). p. 105
[3] Ancestry.com. England, Select Births and Christenings, 1538-1975 [database on-line]. Provo, UT, USA: Ancestry.com Operations, Inc., 2014.
[4] Ancestry.com. England, Select Births and Christenings, 1538-1975 [database on-line]. Provo, UT, USA: Ancestry.com Operations, Inc., 2014
[5] Gloucester Archives, Strickland Family Papers, to "Mr. Peter", negro servant to Sir Geo. Strickland, D1245/2
[6] Hull Advertiser and Exchange Gazette, 10 February 1843
Bibliography
D. Neave and E. Waterson, Lost Houses of East Yorkshire (Georgian Society for East Yorkshire, 1988)

Acknowledgements
Many thanks go to David and Susan Neaves, and Audrey Dewjee for sharing their research and for their assistance in preparing this page.
The painting at the top of the page is The Young Teacher by Rebecca Solomon (1861), reproduced with kind permission of the owner.
The table below represents the numbers of servants present in country houses in the East Yorkshire and Hull areas and is taken from English census data. The research is a work in progress and will be updated at regular intervals when more information is uncovered.