African Stories in Hull & East Yorkshire
By John D. Ellis
​George Pontifex Reeves was born in Freetown, Sierra Leone in July 1891.[1] A merchant seaman by occupation (a fireman or stoker in the engine room of a ship), he enlisted in the Royal Navy on 26th July 1917 (being given the number R/4274). He gave an address in Hull as his place of residence, which suggests that he was a resident (at least temporarily) and enlisted in the city.[2]

​Between July and October 1917, George undertook basic training with the 4th Reserve battalion of the Royal Naval Division (RND) in Blandford, and was then posted to the “Hawke Battalion” (named after Admiral Edward Hawke, 1705-1781). The RND was a light infantry unit composed of Royal Navy and Royal Marine reservists and volunteers (plus merchant seamen like George Reeves), who were not needed for sea service. The division was the brainchild of the First Lord of the Admiralty, Winston Churchill, and as such earned the nicknames “Churchill’s private army” and “Churchill’s little army”.[3] Churchill’s patronage attracted a slew of “celebrity officers” including Arthur Asquith (the son of the Prime Minister Herbert Asquith, and later a Brigadier), Patrick Shaw-Stewart (poet and scholar, killed in action in 1917), Bernard Freyberg (Victoria Cross recipient and later Lieutenant-General, Baron Freyberg, Governor-General of New Zealand), and the poet Rupert Brooke (who died in 1915 whilst serving in the RND).[4]
​George Reeves was not the only Black rating to serve/have served in the Royal Naval Division: Lewis Walcott from Barbados served in the Hood Battalion, (the same battalion as the poet Rupert Brooke), during the Siege of Antwerp (1914) and at Gallipoli (1915).[5] Walter Moore served with the Drake Battalion in the Gallipoli and Somme campaigns (1915 and 1916)[6], while Thomas Jackson, a stoker from Sierra Leone who enlisted in Hull in June 1917, appears to have spent his entire service in Britain.[7]

​In October 1917 George Reeves was promoted to Able-Seaman. Between October and 1917 and November 1918 he served with the Hawke Battalion in the trenches of France and Flanders, in the battles of St Quentin and Bapaume (the German Spring Offensive of 1918), and the 'Hundred Days Offensive' which resulted in the German surrender on 11th November 1918. (Apart from short spells in hospital and a brief period of leave, his service was continuous). George Reeves was demobilised in Ripon, North Yorkshire, in April 1919. 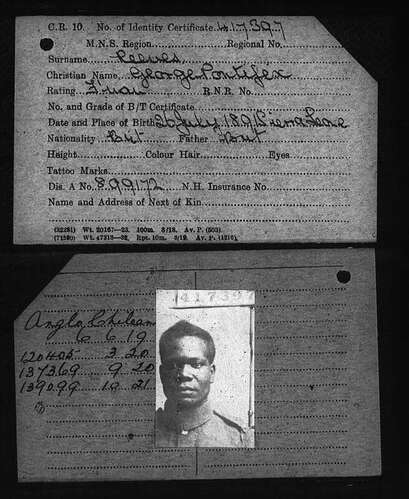 George Reeves' merchant seaman identity card
Similar to most servicemen of the First World War, George Reeves should have disappeared into civilian anonymity, with his ethnicity being unrecorded. However, he subsequently returned to sea after being demobilised and registered as a merchant seaman (with the number #417397). He served as a fireman (a stoker) on the Anglo-Chilean (a cargo steamer built in Sunderland and operated by Nitrate Producers SS Co.) between June 1919 and October 1921.[8] Consequently, an identity photo survives from his registration in the merchant navy, which shows George Reeves wearing his army battle-dress.

His discharge number does reveal another chapter in his life: he received the “Atlantic Star”, indicating that he had served at least six months on the convoys during the Battle of the Atlantic.[11] (Over 30,000 merchant sailors lost their lives, pre-dominantly to the U-boats of the Kriegsmarine, keeping Britain supplied with resources in WW2, with Churchill reputedly declaring “The only thing that ever really frightened me during the war was the U-boat peril”).

The fate of George Reeves remains unknown.
References and sources

Footnotes
​[1] His date of birth alternates between the 26th and 27th of July 1891 in his records. However, his name, place of birth, Royal Navy and Merchant Navy numbers and multiple cross-references indicate that it was the same man.
[2] His address in Sierra Leone was: 20 Percival Street, Freetown. His address in Hull was 4 James Place. George Reeves was a Methodist, and named his adopted sister, Miss Josephine Hancilles, as his next of kin.
[3] Sellers, L. “The Hood Battalion: Royal Naval Division: Antwerp, Gallipoli, France 1914-1918”. (Pen and Sword Select. 2015). Kindle edition.
[4] “The backbone of the battalion” – Lewis Aubrey Walcott, Stoker 1st Class of the Royal Navy, 1906-1919 (historycalroots.com)
[5] Ibid.
[6] “The Soldier” – Walter Albert Moore (historycalroots.com)
[7] Thomas Jackson was born in Froby, Sierra Leone c.1891. He enlisted in the RND in Hull (where he was living at 105 Osborne Street). Jackson’s record provide no indicator of ethnicity. For Thomas Jackson see: Royal Naval Division Service Records 1914-1920. TNA ADM 339. findmypast.co.uk
[8] Screw Steamer ANGLO-CHILEAN built by Short Brothers Ltd. in 1916 for Nitrate Producers' S.S. Co. Ltd. - Lawther, Latta & Co., London, Cargo (sunderlandships.com) Initially in British service, the Anglo-Chilean passed into French and then Italian service, before being torpedoed and sunk by RAF Beaufort bombers off the coast of Sicily in February 1943.
[9] Campaign Medals awarded to First World War Merchant Seamen. TNA BT 351.
[10] Set of WW1 medals on rubylane.com
[11] Second World War Medals issued to Merchant Seamen. TNA BT 395. ancestry.co.uk
[12] A listing of the Atlantic Star medal on eBay.