West African Photographer in Hull
​Henry Glover was a West African photographer living in Hull in the early twentieth century. Although advertisements in the Hull Daily Mail reveal incidents of violence, racism and crime, they give an unjust and negative view of his life. Glover was a hardworking man with a good character, who was well-known in the city. He spent at least two decades in Hull and East Yorkshire.

Henry Glover was born around 1881 in the Gold Coast region of West Africa. Although, we do not know a great deal about his early life, by the early twentieth century he had migrated to Hull and was working as a photographer.

​There is no record of Glover’s presence in the city until 1909 when he was the victim of a racist attack. On 22 February, he was walking along Alfred Gelder street towards the city centre when he was approached by Thomas Cain and another gentleman. As he walked passed, Cain put his stick out into Glover’s path muttering something about Jack Johnson, the Black American boxing champion. Glover then pushed the stick away which prompted Cain to hit him in the face with it. When officer P.C. Bell asked Cain about the assault he advised that Glover was not Jack Johnson, and threatened to hit him again. However, he later claimed that he had merely collided with the Black gentleman accidently but had not assaulted him. While Cain’s motivations cannot be ascertained this was likely a racist attack especially given the reference to Jack Johnson who had caused a stir in Britain and America after his unprecedented success in the boxing ring. Cain was found guilty of assault and fined £2 for the offence. 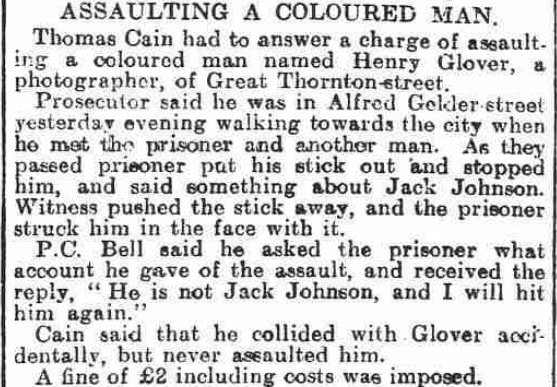 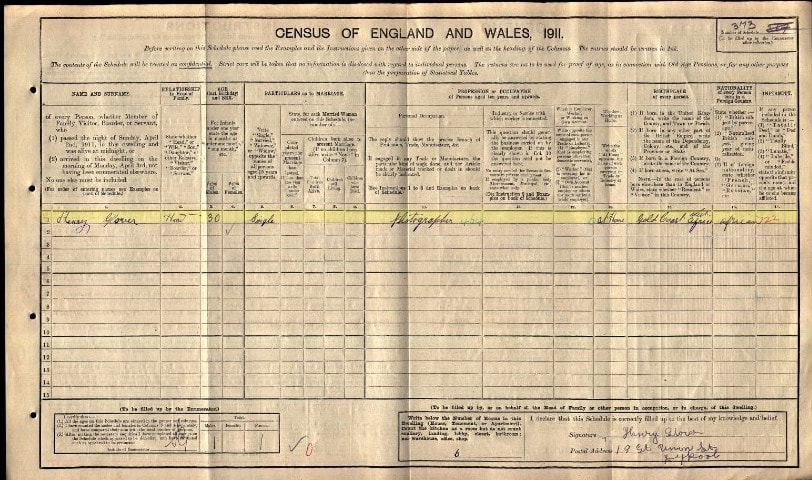 During the First World War, Glover continued to work as a photographer around the docks of Hull. This led to his arrest on 15 June 1915 under the Defence of the Realm Act for being in possession of his camera whilst walking on the south side of Victoria Dock. He was stopped by a policeman and taken to Wincolmlee Police Station where he was found to have three negatives and a quantity of postcards in his possession. Luckily, Glover was well known around the city and convinced the court that he wasn’t doing anything untoward. He suggested that he had been selling photographs to sailors on the docks for 18 years. To which he was told that he must make his living in a different way during wartime. As a result of the charge, he was fined 21 shillings or 18 days imprisonment. (Hull Daily Mail, 29 June 1915, p. 5.) It is likely that Glover paid the fine as prison records have not yet been found. Taking the court's advice, he did find a way to supplement his income, however this also resulted in illegal activity.  On 23 June 1916, Glover was summoned by Hull Corporation charged with unlawfully keeping a seamen’s lodging house. He was fined £2 and 18 shillings. (Hull Daily Mail, 23 June 1916, p. 5.)
was physically described as 5 feet, 6 inches tall with a chest span of 31 and a half inches. However, by July Glover was transferred to the Royal Defence Corps, York as he was medically unfit to be employed overseas. On 3 September, he was passed over to the medical board where an assessment showed he was suffering with myalgia.  The board recorded that this was “not the result of” but was “aggravated by” his military service and that he would “require medical treatment”.  He was awarded a pension of 8/3 (eight shillings and threepence) a week and discharged from the Army on 24 September 1917.  His character was recorded as “Good”.  Interestingly, on his discharge, his age was given as 53 and his date of birth as May 1864.  If this was correct, he should never have been called up for military service in the first place, as the upper age limit for conscription in the First World War was 41.
Below are photographs of the location of Henry Glover's house on Great Union Street.
If you have any further information about Henry Glover or are in possession of one of his photographs, please click here to contact us.