at the Theatre Royal, Hull
Written by Eleanor Rylatt and edited by Audrey Dewjee​

"Music is going to play a great part in the working of the salvation of the negro race."
Will Marion Cook [1]

In Dahomey was the first full-length musical written and played by an entirely Black cast to be performed on Broadway. The play was based on a libretto by Jesse A. Shipp, with music by Will Marion Cook and lyrics by Paul Laurence Dunbar and Alex Rogers. Cook’s music would become to be considered by many as the ‘turning point for African American representation’. [2]
In Dahomey was certainly something new for British audiences. Prior to this, what largely passed for Black entertainment was minstrelsy, in which white performers donned blackface and pretended to be plantation workers from America, presenting songs and sketches which lampooned Black people as lazy, superstitious, dim-witted and happy-go-lucky. In Dahomey, with words and music created by talented African American writers and composers (albeit moderated by what they knew were the tastes of white audiences) was a completely different experience.
Original on Broadway

As the first African American show on Broadway, In Dahomey received excessive media attention.  One New York newspaper stated that a "thundercloud had been hanging over the production" and people were terrified a "race war" would erupt on opening night. [4] As to be expected in late 20th Century in New York, seats in the theatre were racially segregated, yet despite these concerns no disruption occurred on opening night.
Will Marion Cook struggled to be accepted as a "serious" classical composer and performer, and he attributed this to "racial prejudices". Cook said that "the terrible difficulty that composers of my race have to deal with, is the refusal of American people to accept serious things from us." [5] Yet, read anything about In Dahomey and you will see that, both at the time and today, people around the world received the musical with open arms.

His perceptions are also reinforced by Jacob Noordermeer’s comment:

"…it is...striking that Will Marion Cook, a key contributor to this success, was led to writing for popular song because he was kept away from his true aspiration and talents in classical music. [...]while this musical was a step forward for black Broadway theatre, it is also linked to a demonstration of racial prejudice and social discrimination in the field of classical music." [6]

A critic in 1903 stated that it was "fresh" to experience music written and composed by "clever and able representatives of the negro race." [7] This occurred around the same period when Booker T. Washington’s Up From Slavery and W.E.B. Du Bois’ The Souls of Black Folk were published and so perhaps gives context to a period when African Americans were still experiencing intimidation and oppression.
​The British newspaper, Weekly Despatch, referred to the musical as "the talk of the town." [8] However, not all shared this progressive attitude and some recoiled at the introduction of Black culture into the mainstream. One reporter stated that "chiefest and most deadly, the cakewalk tells us why the negro and white can never lie down together. It is a grotesque, savage, and lustful heathen dance" thus showing that post-Victorian society was shadowed with racial prejudice that clouded the success of In Dahomey. [9]
Coming to Britain
Aida Overton Walker, a leading member of the cast, considered presenting refined African American characters on the stage to be important political work. [11] As part of this concern, she made sure that the female performers were dressed in the most elegant manner.  Audiences, expecting the women to be dressed in bandanas and "plantation fashions", were amazed to see them arrayed in the latest creations from Paris.
Coming to Hull

Hull was the first provincial town that In Dahomey played, and the Hull Daily Mail stated that the town was "privileged" to have it here for six nights from 1st February 1904, at the Theatre Royal. [12] The Mail referred to the musical as a "sensation" and claimed that the musical style and dances had "not [been] seen before in Hull." [13]
After a year in Britain, the original cast of In Dahomey returned to America, re-opening the show in New York on 27th August 1904, before embarking on a major tour of the USA. Meanwhile, the No. 2 American company, which starred Dan Hart, Charles Avery and Stella Hart, came to Britain. This second production soon made its way to Hull, appearing at the Grand Theatre for a week from 15th August, where it was received with as much acclaim as the version performed by the original cast. [18]
Cakewalk

One reason so many people loved In Dahomey was due to the cakewalk. However, there was no cakewalk in the original Broadway production, nor was it in the earliest shows in England. It was introduced by the management in the middle of the 1903 season in London, because British audiences expected it. [23] Historically, a cakewalk is a dance contest in which African Americans would compete to win a cake for a prize. Alexander refers to the cakewalk as the "most memorable legacy" of In Dahomey and states that the dance had all audiences "leaping to their feet." [24]
​This was certainly the case in Hull, the Hull Daily Mail recalls the audience "admiring" the dance, which was held on "a very elaborate scale." They state that "cheer after cheer" was had for each couple and their respective efforts to secure the cake. [25]
The people of Hull saw the experience of seeing a cakewalk as a "treat" and claimed that the dancer that did win the cake "danced in a way almost beyond belief." [26] The taste of African American culture that the cakewalk brought to Britain really proved to be a hit. 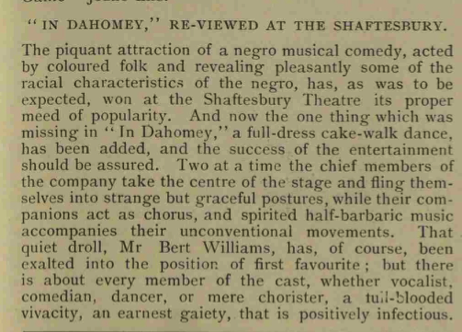 Williams and Walker were received with great acclaim in Hull, with the Hull Daily Mail claiming that "the extravagances of this engaging pair kept the theatre ringing with laughter." [27] The two men were iconic at the time and performed in every performance over the four years of touring that the original cast of In Dahomey completed around the US and the UK. The amount of publicity they received for their part in the musical was remarkable, with the pair proceeding to produce two more musicals as the same act. These musicals, Williams and Walker in Abyssinia and Walker and Williams in Bandana Land, were both successful, though neither could compare to the response In Dahomey received. [28]
Final Thoughts

Those fortunate enough to have watched In Dahomey really did experience something extraordinary, and something that had certainly never been seen before.  When Will Marion Cook stated that music would be part of the "salvation of the negro race" he may well have been right. [29]

1903 saw the continuation of the struggles for African American civil rights and justices in Britain and America. Following the musical tour, the British media claimed that something had to be done about the "colour line" in London with various legal action made to reverse bans of Blacks from patronising certain places of the city.
​A revival of the musical graced Broadway from 23rd June 1999, with a new script created that was "inspired by characters and songs from the three-act musical comedy." This revival has ensured that the legacy of In Dahomey lives on in modern musical culture. [30]
In Dahomey was daring and new for the time. Shipp and Cook took a huge risk when they decided to create the first African American musical on Broadway, but it certainly paid off with the cast, producers and directors (Hurtig and Seaman) becoming very "rich and prominent" due to their "considerable success." [31]
Footnotes