On 4 May 1956, a fight broke out in Hull docklands Blue Bird Café between Ernest Milnes and four African American airmen who were visiting Hull from their US Air Base at Holme-on-Spalding Moor, East Yorkshire. During the fracas, Milnes’ friend Walter Beaumont, a local 27-year-old plaster’s labourer was stabbed in the abdomen. [1] Although, Beaumont had been taken to Hull Royal Infirmary, was operated on and appeared to be making a good recovery, he died several days later. The events that ensued changed the course of legal history and firmly placed African American airman James Clinton Jordan into Hull and East Yorkshire’s important but relatively forgotten Black history.​
In the 1950s, the Royal Air Force (RAF) airfield at Holme-on-Spalding Moor was used as a United States Air Force (USAF) reserve station while their intended main base at Elvington was being developed. Although, we do not know how many Black men were stationed in the camp, we do know that they travelled to Hull to enjoy the city when they had free time. 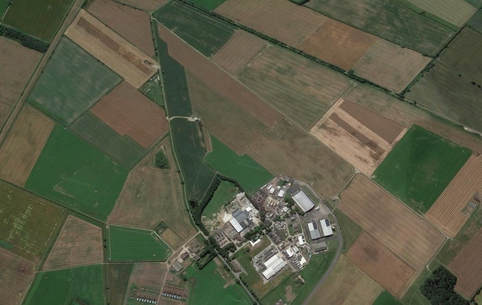 A 2018 Google Earth view of where the airfield in Holme-on-Spalding Moor used to be located.
Sadly, on 12 May Beaumont passed away and an inquest into his death began two days later. The coroner concluded that he had died from ‘broncho-pneumonia due to a penetrating abdominal wound.’ [3] It is unclear whether the airmen were charged immediately after the incident. However, by 15 May they were remanded in custody in Hull accused of murder. [4] Although the airmen’s solicitors asked for their release on condition of bail to the American authorities, who would guarantee they attended their court hearing, the request was declined. [5] This case was set within the context of changing legal powers, the North Atlantic Treaty Organisation (NATO) Status of Forces Agreement in 1951, the Visiting Forces Act of 1952 and the Churchill-Truman Communique also signed in 1952, determined the legal status of the American servicemen serving in Britain agreeing that they would be subject to both US and UK laws.
On the 15 July, the African American airmen appeared at the Leeds assize court ready to stand trial for murder. They all pleaded not guilty. [6] On 19 July, Grayson, Marton and Hill were acquitted due to insufficient evidence. The three men also claimed that they did not know that their friend had been carrying a knife. [7] The following day, James Clinton Jordan from Newark, New Jersey was convicted of murder and sentenced to death. [8] Jordan was taken to Armley Prison in Leeds to await his execution which was provisionally fixed for 9 August. [9]
Although the jury added a strong recommendation for mercy to Jordan’s sentence, originally it was decided that there were no grounds for appeal just the hope, in a climate of changing attitudes towards capital punishment, that he would be granted a reprieve. However, on 27 July, Jordan lodged an official appeal against his sentence as new evidence had been brought forward. [10]
On 21 August 1956, three judges, Mr Justice Hallett, Ormerod and Donovan sat for the Court of Criminal Appeal in London. Together they granted the defence solicitors permission to bring further evidence forward which was only typically allowed if it could be proven that certain facts were not available in the original trial. Mr Geoffrey Veale, who defended Jordan told the court that, “The case comes before the court in the most unusual circumstances.” [11] He went on to explain that four days after Jordan’s conviction, a doctor who had witnessed Beaumont’s medical treatment contacted the US Air Force because he believed that the victim’s death was not caused by the stabbing. They then contacted Payne & Payne solicitors of Hull, who were defending Jordan, so they could begin the legal process of appeal. [12]
In light of the doctor’s submissions, the defence argued that the bronchial pneumonia was caused by the use of Terramycin and the large quantity of intravenous fluids administered to Beaumont two days before his death. Terramycin had been given to the victim as a precaution, as it was used to kill dangerous bacteria in the body. However, Beaumont showed clear signs of being allergic to the drug and developed acute diarrhoea. [13] His treatment was stopped but then two days later he was given more Terramycin and excessive amounts of fluid via a drip which resulted in his death. [14] Mr Justice Ormerod asked Veale whether he was implying there had been a mistake in the medical treatment of Beaumont, to which he replied “Yes. I say that there was an error of judgement and that there was a course of treatment which broke the chain of causation.” [15] Thus, he argued that there was substantial doubt over whether Jordan actioned Beaumont’s death by inflicting the stab wound advising the court that the bronchial pneumonia caused death, eight days after the stabbing and that a “error of judgement” in the treatment given to Beaumont which involved the use of the antibiotic Terramycin killed the victim. [16]

Daily Herald, 22 August 1956.
During the trial the defence called two expert medical witnesses, pathologist Dr Keith Simpson, who was one of the most knowledgeable and eminent men in the field, and surgeon Guy Blackburn, who both agreed that while the stab wound was not trivial, it should not have caused the death of a young man. [17] As a result of this evidence Jordan’s conviction was quashed unanimously by the Court of Appeal. Sadly, the doctor who saved his life was not named in the court or in any of the newspaper articles about the appeal.
Footnotes