One of a “Band of Heroes”​
By John D Ellis
​Hull, the 33rd Foot and Waterloo.
Hull had been the depot for the 33rd (West Riding) Regiment of Foot (hereafter the 33rd), since 1812 when it had returned from campaigning in India under its Colonel in Chief – The Duke of Wellington. In June 1815, the 33rd were reunited with Wellington for the Waterloo campaign. They served at both the battles of Quatre Bras and Waterloo. At the latter they were repeatedly forced to form 'square' to repulse cavalry charges and were continuously raked by French cannon fire. After three days, approximately half of the men of the 33rd were either killed, wounded or missing. Whilst some regiments awarded the Waterloo medal to all soldiers who took part in the campaign, (even those not present at the battles), the 33rd only awarded the medal to those who stood in the square at Quatre Bras or Waterloo. The Waterloo medal was the first awarded to all ranks of the British Army for fighting in a specific action. The campaign itself was the end to a long series of conflicts between Britain and France, and the public reaction to the victory was comparable to that seen on VE and VJ days in 1945. A popular rhyme of the time sums up the location of the battle and those who fought there in the minds of the British public:

​Arriving back in Hull in December 1815 the 33rd were feted, with The Hull Packet referring to them as “a Band of Heroes”, and civic events were held in their honour.[1]
John Lewis Friday
​​Approximately two years after returning to Hull, John Lewis Friday, a Private in the 33rd and veteran of Waterloo, married Mary Woodall in Sculcoates, on Tuesday 29 December 1817.[2] By 1817 the people of Hull would have been used to the presence of red-coated soldiers in their streets and a marriage between a soldier and a local woman would not have being unusual. Whilst both John and Mary were “of the parish” at the time of their marriage he was not born in Hull. John Friday was from Africa.[3]

How or why John Friday came to Britain, where he was born and how he came to serve in the 33rd Foot remains a mystery. He could have been an escaped slave, a servant in the retinue of the 33rd as it sailed from India via Africa, or a sailor on one of the many merchant vessels trading with Hull. Friday named the place of his birth as “Mossambasse”, which could be a transliteration of Mozambique in Eastern Africa, as there was at least one Black soldier from the country serving in the British army at the same time.[4] He enlisted in the 33rd Foot in May 1813. At the time, the Headquarters and Depot were based in Hull, whilst the 1st Battalion was serving on ceremonial duties in Windsor. The nearby city of London was home to a Black population from which a number of regiments appear to have drawn Black recruits.[5] Unlike regiments which had traditions of employing Black soldiers, there is no evidence of an extensive or extended Black presence in the 33rd Foot.[6]
John Friday the Military Musician.
John Friday would have initially spent time being trained in basic soldiering before he became a military musician.[7] Being ranked as a Private rather than a Drummer suggests that Friday was probably employed in the band of the 33rd, undertaking a variety of roles including drummer, trumpeter, big drummer (the bass drum), kettle-drummer, cymbals or tambourine player.

John Friday experienced the horrors of war for himself on the fields of Waterloo, but other Black soldiers also served in the same campaign; Private George Rose, a Jamaican, served in the 73rd Foot in the same brigade as John Friday and was shot in the arm.[8] The records of James Goodwin, a Barbados born Trumpeter in the 18th Dragoons, and already a seasoned veteran of the Peninsular campaign, noted that he "distinguished himself in action."[9] However, as a Black soldier the racial hierarchies of the time meant that John Friday would have little opportunity for promotion; the tolerance of the presence of Black soldiers by their White peers seldom extended to a willingness to serve under their command. 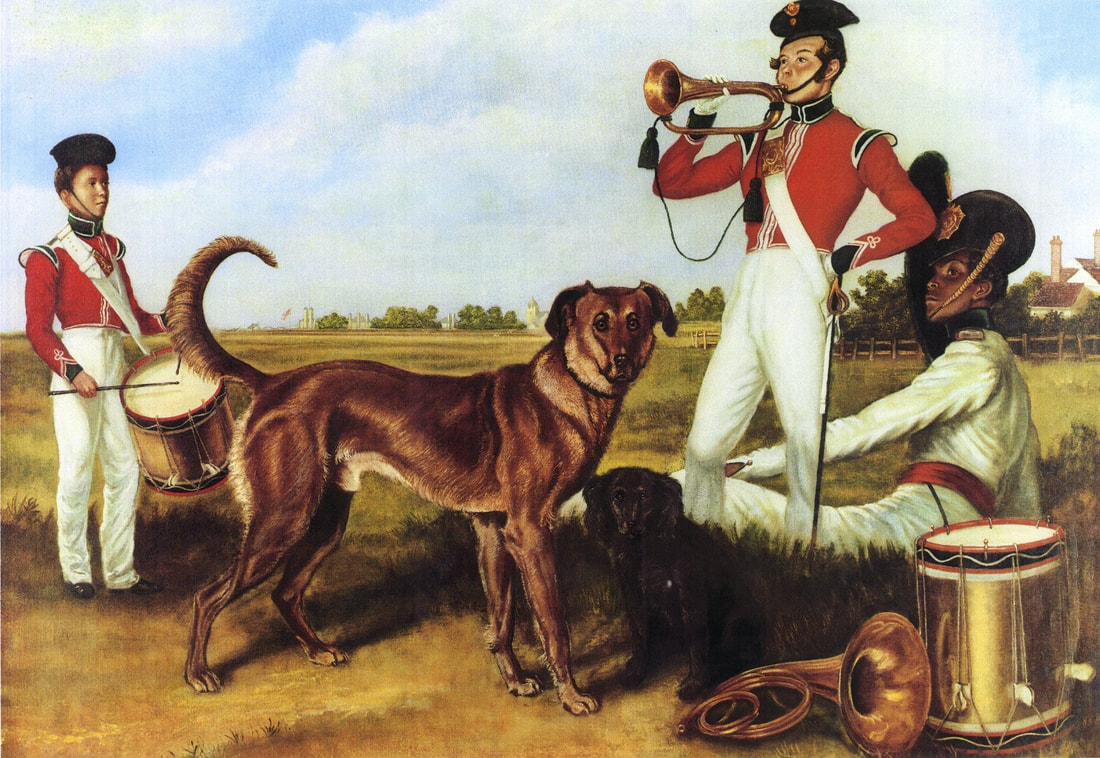 'Buglers and Drummers with Dogs on the Parade Ground', Unknown Artist, With Permission of 'The Prince of Wales's Own Regiment of Yorkshire Collection, York Army Museum'
Married Life
Upon her marriage to John Friday in 1817, it is not known whether Mary Friday was accepted 'on strength' and became an army wife, drawing rations and living in the same accommodation as her husband and his enlisted peers, (with privacy being reduced to a blanket hung between bed-spaces). With only six wives allowed 'on strength' for every one hundred men it is likely, initially at least, that Mary as the new wife of a relatively junior soldier would have lived in rented accommodation outside the barracks. However, wherever the domestic arrangements of the Friday family had been established, John and Mary were not alone for long; the records in Kirbymoorside for 21 July 1819 record the baptism of John Friday, son to John Friday a “musician in the 33rd Regiment.”[8]

Discharge, 'Civvy Street' and Re-enlistment.
Between 1817 and 1820 the movements of the Friday family are unknown; however, it is likely that they accompanied the 33rd Foot as it served on garrison duty throughout the United Kingdom from Glasgow to Guernsey.[9] In 1821 the 33rd moved to Dublin, Ireland, however, this time John Friday did not accompany them as he had been discharged in May the previous year, probably at the end of his seven year period of service. When discharged at the end of limited service or on the reduction or disbanding of regiments former Black soldiers appear to have re-enlisted at a rate far higher than their white peers.[10]

On 15 February 1821, and less than seven months after leaving the 33rd Foot, he re-enlisted in London in the 2nd Battalion of the 1st Foot Guards.[11] The Foot Guards regiments were, and indeed still are, responsible for the protection of the royal family and for ceremonial duties in the capital.

Whether John Friday gravitated towards London for work or to re-enlist is unknown. However, when he re-enlisted he did so into a high-profile group of Black military musicians who had developed a reputation for showmanship, mischief and resilience. The three regiments of the Foot Guards had employed Black military musicians since the 1780s.[12] Their showmanship made them popular and prominent figures in military display in the capital, being visually represented in a variety of genres from penny prints, to political satires such as Cruickshank’s Triumphal Entry of 100,000 Crowns (1791) and abolitionist propaganda such as Mrs Ross’s Negro Bandsman of the Coldstream Guards (1790).[13] However, these men were not merely representations of the Oriental 'other' as Black trumpeters had led the arrival of the Guards in Lisbon, Portugal when the regiments returned to serve in the Peninsular campaign in 1811, and at least one had died there.[14]
Notes and References.
I am grateful to Audrey Dewjee for the information about John Lewis Friday in East Yorkshire and to Barbara Chambers for originally identifying John Lewis Friday as a Black soldier. Additionally, RHQ, the Grenadier Guards have greatly assisted in identifying Black Grenadiers who served in their ranks prior to the twentieth century. Apart from the archives of the Grenadier Guards, the majority of the sources used in this study come from The National Archives (TNA) in Kew. Most of them can be found online at www.nationalarchives.gov.uk or are accessible via www.ancestry.co.uk or www.findmypast.co.uk
​
The initial research that provided the basis for this study was undertaken for my MA thesis, and a synopsis can be provided on request. Ellis, J. D. “The visual representation, role and origin of Black soldiers in British Army regiments during the early nineteenth century.” (Unpublished MA thesis, University of Nottingham, 2000).