African Stories in Hull & East Yorkshire
In 1983, a few weeks before she died of cancer, my mother told me that she had been brought up in a children’s home. As we were very close, this came as a complete surprise because she had always led me to believe that she had been brought up by her grandmother. When I asked her to elaborate she wouldn’t, but said she’d never told me before as she thought it would upset me.

Eight years later, I was appearing at the Theatre Royal in York. An article appeared in the local newspaper and members of my mother’s family contacted me. Through them I discovered that there was more to her life than I had ever imagined. Not least, I began to discover what it must have been like to grow up as a mixed-race, illegitimate child in a Yorkshire village during the early part of the last century. I also began to reconsider the history of Black people in Britain. Historically, it is generally believed that Black people arrived in Britain in the 1950s yet, as a child growing up in London during the 50s, all the ‘coloured’ people I knew had been born here.

​This is my mother's story.
In January 1930 Laureen was back at St Margaret’s helping in the kitchen. A letter date 24 January from Mr J H Hayers, the Secretary of the Ripon-Wakefield and Bradford Branch to Revd. A J Westcott, the Secretary of the Waifs and Strays Society stated that she was determined to join a coloured troupe of dancers. Laureen had had difficulty in Yorkshire with the public making remarks about her colour and this influenced her decision to seek employment elsewhere in the country.

​​On 14 April 1930 Mr Hayers reported that Laureen had communicated with a Mons Paul, an illusionist, and had made arrangements to work as his assistant in Bognor  and then for a season at Morecambe. After that she travelled with him to Cork, Ireland.​

​Having fulfilled her engagements with the troupe, Laureen moved to London where, in 1931, she worked in a coffee shop in Aldgate.  Later that year she took up service again for a Jewish family (The Kauffmans) in North West London, remaining in contact with them until the 60s. As a child I remember that she would cook the most delicious Jewish food, which she had probably learnt from them. 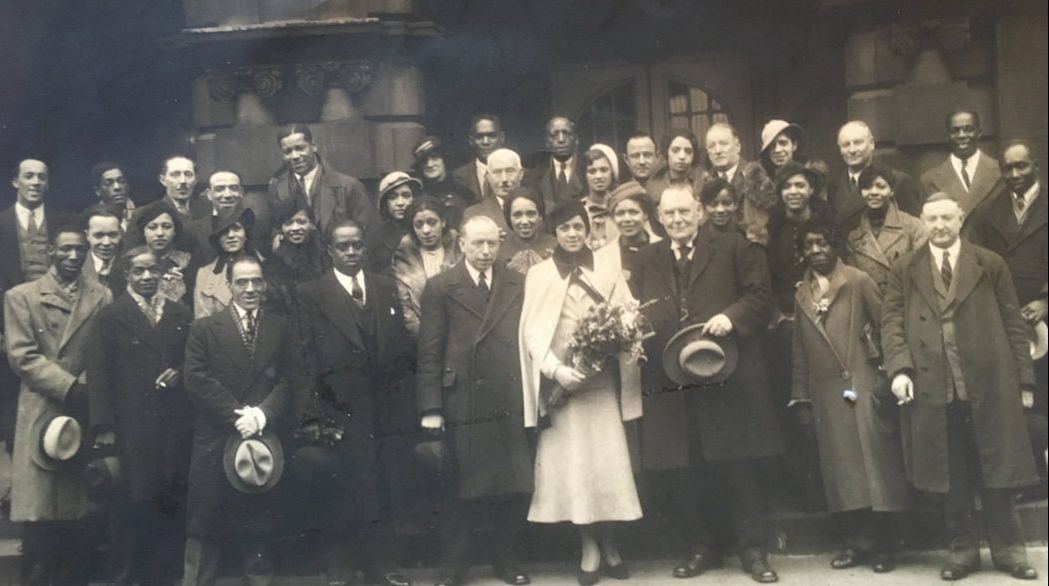 A wedding whilst on tour in Belfast. Laureen is in the second row between the Bride and Groom
In 1944 she married Owen Oscar Sylvestre  from Trinidad, a Flight Sergeant in the Air Force, who came to England to fight in the war. Owen had been awarded the DFM which  was  awarded to non-commissioned officers and men for exceptional valour, courage or devotion to duty while flying in active operations against the enemy.
Laureen died on 3 January 1983 from cancer, aged 71. She never bore any malice or hatred towards her mother who rejected her, or the fact that she was bought up in a home. She had led a rich and creative life.