Activist and Fugitive Slave
by Hannah-Rose Murray
PhD student, University of Nottingham
Moses Roper remains an unknown figure in the twenty-first century, despite his immense impact on the transatlantic world during the Victorian period.

Roper was born enslaved in North Carolina in c.1815 to an enslaved woman and a white plantation owner. He suffered extreme acts of torture and violence, which he believed was because of his near-white skin. He was owned by several different masters and tried to escape at least twenty times; every failed attempt led to severe punishment. He was forced to wear chains and manacles, and in one instance was chained to an enslaved woman for several weeks. He was also frequently whipped, sometimes up to one hundred times in one sitting, and had his fingernails ripped off on at least one occasion. After displeasing his master once again, part of Roper’s face was smeared in tar and was promptly set alight. Roper’s courageous resistance eventually paid off, when he finally escaped from a Florida plantation in 1834 and travelled to New York.
means. He had a duty to write and speak on the subject of slavery, and convince others of its cruelty. Along similar lines, in December 1842, he arranged a lecture in Beverley Guildhall, where:

“[Roper] gave a most harrowing description of slavery, as it at present exists in the United States, from which it seems that in the ‘land of the free’ the most horrid cruelties are perpetrated upon nearly three millions of human creatures [sic], in consequence of having a drop of negro or Indian blood in their veins, or because they differ from the tyrant republicans in the colour of their skins. The instruments of torture used for punishing the poor slaves were exhibited and caused a great sensation. At the close of his address, the speaker said he had published a narrative of his adventures and escape, and from the profits arising from its sale he wished to raise a sufficient sum to purchase the liberty of his mother and eight brothers and sisters, who are now in bondage. The hall was crowded in every part by a respectable auditory, and deep interest appeared to be felt by all present, as they listened to the awful details of the runaway, and happily in this country, freed slave, who spoke English very fluently, having, we understand, been under instruction at one of our universities.” (The Hull Packet and East Riding Times, December 16 1842)

Roper – like many other Black abolitionists – chose to exhibit “instruments of torture” such as whips, chains and manacles. This technique was used to highlight the extreme suffering men, women and children were subjected to, and force British audiences to realise the true nature of American slavery. Many Britons believed accounts of slavery had been exaggerated or that white slavery existed in Northern factory towns, and men such as Roper frequently denounced such comparisons, as no white person could experience what a Black individual had endured at the hands of slaveholders. Roper’s mission to Britain during this time, as mentioned, was to raise money to buy his family from slavery, and at the end of the article the correspondent expresses surprise Roper spoke fluently and eloquently. This speaks to the complicated racial dynamics of the Victorian period, in which white Britons believed most Africans (and especially formerly enslaved people) spoke in a so-called plantation dialect where proper spoken English had to be learned.

Aside from the ingrained racism Roper felt in Britain, thousands of people came to hear him speak and read his Narrative. Roper returned to America and still lectured sporadically into the 1870s and 1880s. He suffered from illness towards the end of his life, and was found one night at a train station in Boston with his loyal dog by his side. He was taken to hospital but died shortly afterwards in 1891. 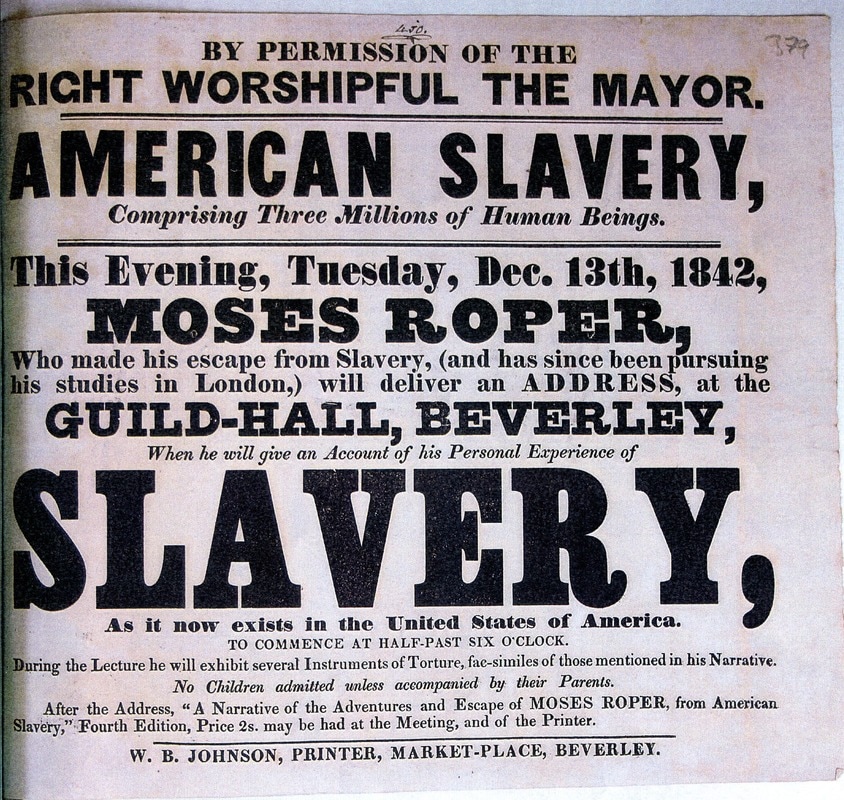 Source: Beverley Treasure House. ref: DDX1942/1/4
Additional Information: Added December 2017.
Moses Roper in Hull
On 8 October 1839, Moses Roper visited Hull to give a personal account of American Slavery. Audiences who attended the public rooms in Jarratt-Street heard the abolitionist speak out against the horror of bondage across the Atlantic and saw an exhibition of the instruments of torture which Roper discussed in his written narrative.

The poster which advertised the event gave some biographical details about Roper and why he was touring Britain. It suggested that Roper was pursuing his studies at University College, London, and during his vacation was to tour the country to ‘expose the system of American Slavery’ and promote his book. It also detailed that the money raised from his work would enable him to further his education and enable him to be ‘useful among the African race.’[1]

The Third Edition of Roper’s book was sold at the gathering and also at Mr J. Purdon’s book store located in Market Place for two shillings and sixpence and included a portrait of the author engraved on steel.[2] 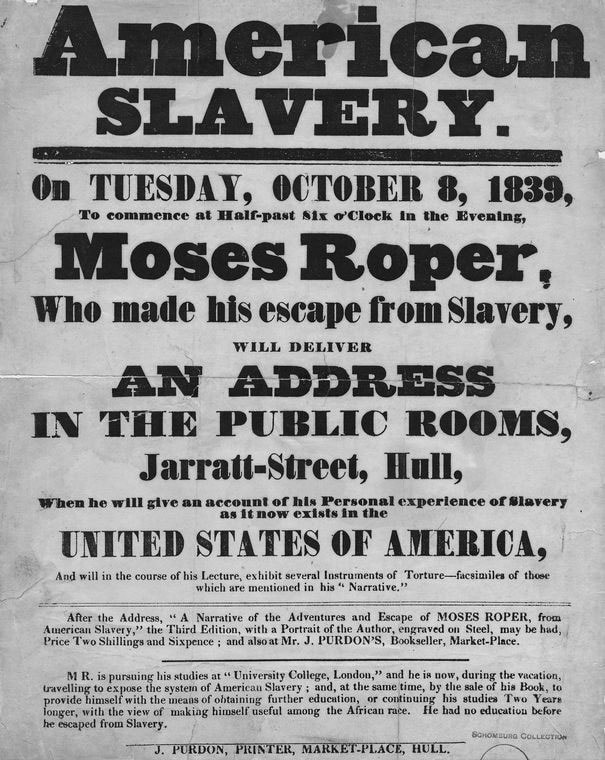 Source: http://slaveryandremembrance.org/collections/object/?id=OB0032
Visit to Howden
On 6 January 1843, an advertisement in the Hull Advertiser and Exchange Gazette reported that Roper had visited the Independent Chapel in Howden three days prior. He gave an account of his personal torment when enslaved. Once again, he exhibited instruments of torture which were used on slaves in America. It is probable that this lecture was very similar to those in Hull and Beverley.