by Rona Dickinson
Reverend Edward Cragg Haynes was known as the ‘Black vicar’ by his Victorian congregation and he was one of the earliest formally trained Black clergymen in England and probably the first in Yorkshire. He was to leave his mark on the village of Swinefleet through renovations at the church and his teaching at schools in Swinefleet. As early as 1854 he had established a school at Swinefleet and later as a result of his legacy the church was almost rebuilt; in 1882 thanks to his efforts and in 1903 as a result of a £500 donation from his widow after a fire.
Rev Cragg Haynes was probably born on 14 May 1821 in Bridgetown Barbados. It was a time when segregation in both church and at school still existed. At church there was an altar area for whites and one for Black people as well as having separate pews. It was said at the time that "Life was Heaven for whites, Hell for slaves and Purgatory for Free Coloureds." Non-whites could not become Anglican ministers and the wealthy were educated abroad. 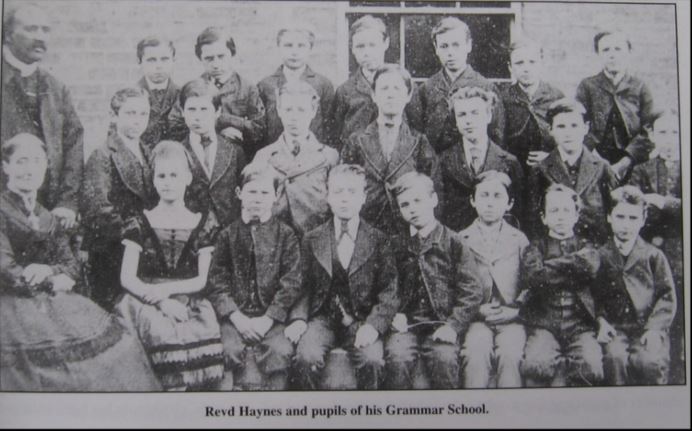 Reverend Edward Cragg Haynes and his wife Henrietta with their pupils at Empson Villas, Goole
The Reverend's family history has been traced back to the eighteenth century. His grandfather was Richard Cragg Haynes (1765-1820). Although no documentation exists, Richard’s possible parents are William Cragg and Mary Haynes. From later slave register records it is clear that Richard Cragg Haynes was a free 'mulatto', that is, he had Black and white parentage. It is likely that his father was a freed slave and his mother was of white descent. As a Freedman Richard could choose his surname and decided to be named ‘Haynes’ after the prominent family his mother had married into but still retaining that of his biological father ‘Cragg’. The Haynes family were prominent plantation owners of considerable wealth and were politicians and administrators of the Crown.

A Freedman was a person, whether male or female, who had some degree of African ancestry, and was either born free or manumitted from enslavement during the period of slavery. Freed slaves preferred the terms ‘coloured’ or ‘Black’ rather than ‘negro’. In 1748 there were 107 reported Free Coloured Persons. By 1768 when Richard was three years old there were 448 and by 1780 the number had increased to 838. By 1829 when Rev Edward Cragg Haynes was eight there were five thousand which amounted to five per cent of the population of Barbados. On the eve of emancipation (1833 -34) there were 6,500 Freedmen who were predominantly resident in Bridgetown.

Freedmen were classed as British subjects. They paid taxes and served in the Militia in segregated units as non-commissioned ranks. They were owners of considerable property and were usually educated abroad. However, until the end of slavery their civil rights were restricted and they had less social privileges that were given to the whites. They were unable to testify in legal proceedings against whites and serve on juries. They were debarred from voting and holding elective office. They could not become ministers in the Anglican Church and they were also segregated inside the church with different seating areas and different communion tables. In education Freedmen were excluded from parish schools which were attended by the poor whites even though the taxes they paid help towards the cost of schools. The majority of private schools were segregated. If they were rich coloured men they were able to send their children to England to be educated. Wealthy Freedman merchants were even excluded from the Merchants’ exchange
in Bridgetown. Socially Freedmen were situated socially between the free whites and the slaves. Seaforth, the Barbados
Governor, named them “the Unappropriated People.”

An 1817 slave Register shows the ownership of slaves by Richard and in his Will dated 21 February 1820, William (his son) was left a Negro girl slave named Anna Mariah with his future issue and increase after to be born to him and his heirs, and a parcel of land situated in Maiden Lane in the parish of St Michael, which measured 23 foot in the front and 50 foot deep, left to him and his heirs forever. So although Edward’s lineage was that of free mulattoes, his grandfather, father and his uncle were merchants and owned slaves. However, in later years his uncles went on to be leading members in the antislavery movement. His uncle Edmund was a friend of Samuel Jackman Prescod, another Free Coloured man, who became editor of the Liberal, a radical newspaper that expressed grievances within the free community. Prescod also became the first Black minister to serve in parliament in Barbados.

William Cragg Haynes (Edward’s father) was the oldest son of Richard Cragg Haynes. On his marriage record he is listed as an FCM (Free Coloured Man). The Barbados records state that on 14 May 1818, William Cragg Haynes married Sarah Catherine Blackman FCW (Free Coloured Woman). He was a wealthy Freedman merchant as well as being a plantation owner.
The location of property owned by William Cragg Haynes which later became the Colonnade, the DaCosta Shopping Mall
Sarah Catherine (also Katherine) Blackman (1794-1864), his wife was a woman of property as she owned properties in areas noted for a substantial concentration of small retail establishments. It was renowned then as now for being the centre of commerce.
She received slaves as a gift from Ann Blackman who is probably her mother and a free negro. This can be seen from the slave registers of 1832 and they also inherited some land in Maiden Lane, Bridgetown. William and Sarah Catherine had nine children between 1818 and 1833: Eliza Anne Haynes; Edward Cragg; Francis Haynes; Richard Edghill Haynes; Sarah Elizabeth Haynes; Thomas Haynes; William Haynes; Sarah Katherine Haynes and Charlotte Valverde Haynes In 1823 William, Edward’s father, was among the three hundred and seventy three Freedmen signators demanding civil rights, and later in 1841 he was involved in asking for help with the education of “a certain number of youths of colour in the learned professions at some of the seminars in England”

William died in 1849 at the age of fifty six leaving the following will:
“I William Cragg Haynes, of the Parish of Christ Church gives permission to my executors to give my daughter when
she is twenty one or before that time advantageous, to sell and dispose of all my estate.
I bequeath 1,000 dollars to my son Edward Cragg Haynes.
I bequeath 1,000 dollars, equally between my wife and two children William and Charlotte and their surviving heirs,
and my property and tenants in Commons.
My son William and two brothers Edmund Cragg Haynes and Charles Cragg Haynes and Charles Cragg Haynes to
be executors”
At the time to the will, Edward was undertaking religious education and on 23 September 1849 offered himself for ordination as a deacon.

The family had sent Edward to England to be educated and he entered Kings College in London in 1839 at the age of eighteen, and from his entrance papers it appears that he was probably born on 14 May 1821. He had registered with the Inns of Court of Middle Temple in 1842 probably intending to undertake a legal career but he seems to have changed course. Edward was admitted to Trinity College on 19 June 1844 as a fee-paying student. He attained a BA on 6 June 1848 which included a course in divinity. He lived in Christchurch in Surrey and undertook religious education at Southwark Cathedral before being ordained as a deacon in 1849. In that year while living at Tring Edward received about £15,500 from his father’s will. This would be a substantial amount and would also help
him in acquiring a post in another parish.

Before coming to Swinefleet he served as a deacon at Drayton Beauchamp near Tring with a population of around 230 and he received a stipend of £30. He was later ordained by Samuel Wilberforce, the son of William Wilberforce at Cuddesdon in Oxford.
It is unclear why Cragg Haynes went to Swinefleet as a curate on 19 December 1851, but he may have learned of the Marshland parish by meeting with Lady Anne Ross of Aston Abbotts in a neighbouring village in the same parish of Drayton Beauchamp. It is possible that she wrote a letter of introduction and become a patron.

On 28 June 1855 Edward married Henrietta Fowler, the daughter of a solicitor from Gainsborough, who as avisitor to Swinefleet stayed at Swinefleet Park with an Elizabeth Inland. She also helped in the school. She was thrity six years old and he was thirty four years old. On his marriage certificate his father was recorded as planter. The couple had a son, Edmund Fowler Haynes who was born on 21 April 1863 at Swinefleet but died at the age of thirteen on 13 January 1877.
Edward was clearly renowned for his musical talents. An account on his lecture on Music and its History given in 1861 at the Mechanics Institute in Goole reported that “This lecture contained an interesting and succinct account of the progressive development of music in our own and continental nations, from the earliest to the present time, with very apposite and pleasing quotations and extracts from some of the most eminent composers. The Rev. gentleman considered music to be applicable to every condition in life as suitable in adversity as prosperity, as potent to assuage grief and soothe the sorrowful as to exhilarate and give zest to enjoyment in the hour of mirth and
gladness. The room was well filled and they testified their appreciation of the subject by giving great attention and unanimous
thanks to the lecturer."
Although Edward was to receive other bequests on the deaths of his uncle Edmund and uncle Charles (£50; approx £3,350), it wasn’t until 1872 before he was appointed vicar of Swinefleet thereby receiving a better living from the church. He found the church in a bad state. He wrote, “The church with little or no accommodation for the poor is an old brick building. So unsafe are the timbers of the roof that the service must be held in the schoolroom. The vicarage is a merely dilapidated cottage in close proximity to the most offensive drain.” Owing to the delay, however, in building the new vicarage the Reverend Haynes remained in Old Goole for ten years and Empson Villa became known as the 'Black Parsonage'.
Edward Cragg Haynes died suddenly on 20 September 1883. His obituary said, “For several years the Rev gentleman has been very anxious to have the church at Swinefleet rebuilt and restored as for some time it has been in ruinous and dilapidated condition. The results of his efforts have been improvements of no slight character, the whole of which will be very shortly finished. The Reverend gentleman’s powers as a reader were acknowledged through the district.” His wife inherited his estate including various musical instruments.

Early research in 2000 was undertaken by June Bradburn, a member of the Marshland Local History Group when collating information about Swinefleet Schools. The baton was then taken up by Charlotte Hursey, a member of the Howden Civic Society. My interest in Edward Cragg Haynes started when we included the vicar in our “Marshland Trail” for “Heritage Open Day” in 2010 and when I was invited to visit Barbados.