Nathaniel, Fred and Harry Weeks
The following is the story of Nathaniel, Fred and Harry Weeks.  Nathaniel Weeks arrived in England at the turn of the last century as a labourer and within a generation his sons Fred and Harry Weeks became entrepreneurs developing a business in the agricultural industry. They employed hundreds of people in East Yorkshire and their reputation was such that Weeks trailers continue to be remembered at home and abroad even today. Aspects of this remarkable partnership between the two brothers is recounted in Richards Weeks's own oral history which can be heard HERE. We are very grateful to Richard his cousins Victor, Anne and Paul and their willingness to share their family history with us.
Nathaniel Weeks (1871-1953)
Nathaniel Paul Weeks was born and baptised in the autumn of 1871 in St Michaels, Barbados. His mother was Cecelia Allen (Alleyne) and his father also named Nathaniel Paul Weeks. He had at least five siblings, Constance, Isabella, George, Gertrude and Sarah. In the late nineteenth century, Nathaniel left his family in the Caribbean and crossed the Atlantic to start a new life in Britain. Unfortunately, details regarding his arrival have not been found. However, it is possible that Nathaniel saved enough money to board a vessel as a steerage passenger or worked on one of the many ships that returned to England from Barbados before 1900. According to a story which has circulated in the Weeks family, Nathaniel arrived in Liverpool as a teenager on board a vessel which brought fruit to Britain from the Caribbean. When he disembarked from the ship, Nathaniel asked a road sweeper where he could find work and the man encouraged him to travel to Hull. Thus, determined to start a new life, he hitchhiked across the country until he reached East Yorkshire. This must have been a long and arduous journey and it is likely that the Barbadian suffered bitterly from the cold.
In the summer of 1911, Nathaniel married 28 year old, local dressmaker Harriet Annie Jefferson. Unfortunately, it has been impossible to find where or how the pair met. However, the Weeks family believe the partnership was greeted with some resistance from Harriet’s relatives. This may not have simply been because Nathaniel was Black, he was considerably older than Harriet at the age of 40. By 1913, the couple had moved into their own house at 15 Rosedale Avenue, Sculcoates and the following year had settled at 3 Clarence Avenue in Hull. If family stories are correct at this time Nathaniel had found a job working for the council and was receiving a stable income.
Fred Weeks (1914-1977)
exercise was to climb to 5,000 feet and travel at 250 miles per hour for five minutes. If it was successful, the aircraft would be used as a submarine spotter. It could attack and perhaps catch the sub before it dived.” Fred recalled that on 7 April 1940, he and four other men boarded the aircraft, they quickly reached the correct altitude and speed to test the plane. However, after two minutes they experienced windy conditions and it became increasingly apparent that something was wrong. As the pilot tried to hold the plane steady, Fred pulled on the throttle stick to no avail. The pilot then gave orders for the crew to bail out so Fred got into a parachute and jumped out of the plane. In his interview Fred was very nonchalant and factual about the experience. His calm and cool approach to this terrifying event highlights his laid back character. He remarked that once he had jumped, he was hurtling to the ground at around 120 miles per hour, but it was only after he had counted to ten seconds as previously instructed that he then pulled the ripcord to open his parachute. When Fred realised he was going to land in water he quickly removed his parachute. This was an extremely sensible move, however in the situation this highlighted Fred’s ability to think logically even in the most difficult circumstances. While Fred and one other airman managed to escape the plane, he had no idea what happened to the rest of the crew as they did not bail out as directed. However, it is likely they died as Fred watched as the plane spiralled out of the sky. When two vessels were sent to rescue the airman it took them an hour to find Fred as they were chasing the parachute, not realising he was no longer attached to it. Once he was pulled out of the water he was taken to Glasgow. Shortly after the plane crash Fred was sent a gold caterpillar to celebrate his success in using a parachute to bail out of a failing aircraft. Thus, he became number 2,000 in the Caterpillar Club. 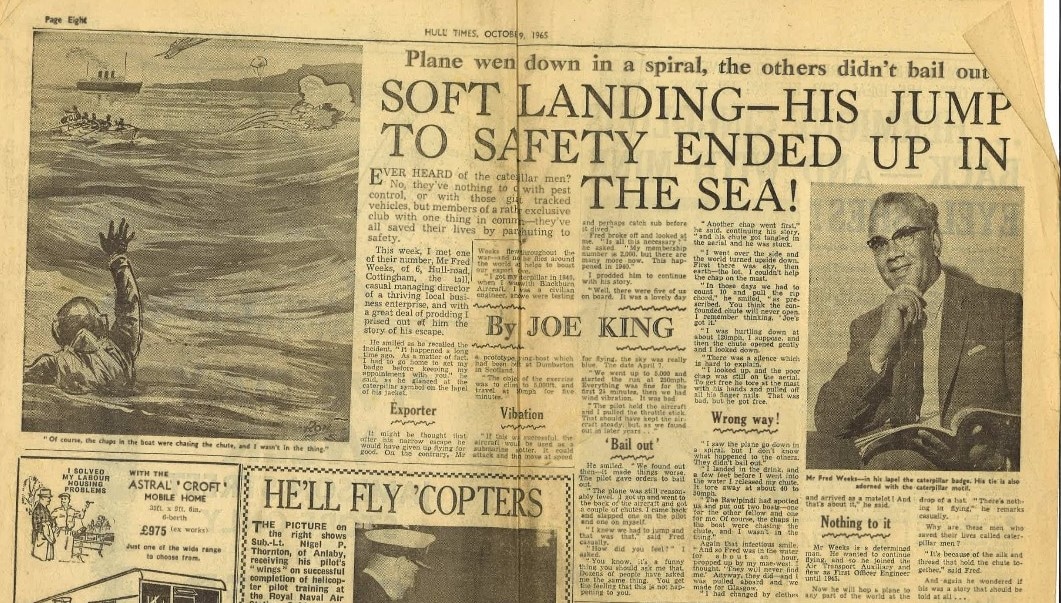 Fred's interview with the Hull Times, October, 1965.
Harry Weeks (1916-1971)
Harry also travelled abroad on company business on several occasions, once spending a month in Ceylon (now Sri Lanka) supervising repairs to Weeks sugarcane trailers which had been damaged in service.

Sadly, Harry died suddenly aged 55, in December 1971 at the family home in Kirk Ella, East Yorkshire. His wife Betty died thirty years later on 7 July 2001.
The Weeks Family Business
After the Second World War ended in 1945, Fred and Harry Weeks began to evaluate their future. They understood that the aircraft industry would not continue as it had during wartime and therefore decided to look to their own business acumen to ensure they had a prosperous future. As both brothers were engineers, Fred and Harry looked to capitalise on their skills. They set up their own car repair garage in Lambert Street, Hull. However, after twelve months work started to diminish and the brothers decided to expand into another market as they began to produce dolls prams. Machinists were brought into the garage and a small number of women around the region were employed to make pieces for the prams in their homes. The toys sold well and between 1946 and 1947 where 4,750 produced and distributed throughout Britain. Unfortunately, we have been unable to track down an original. 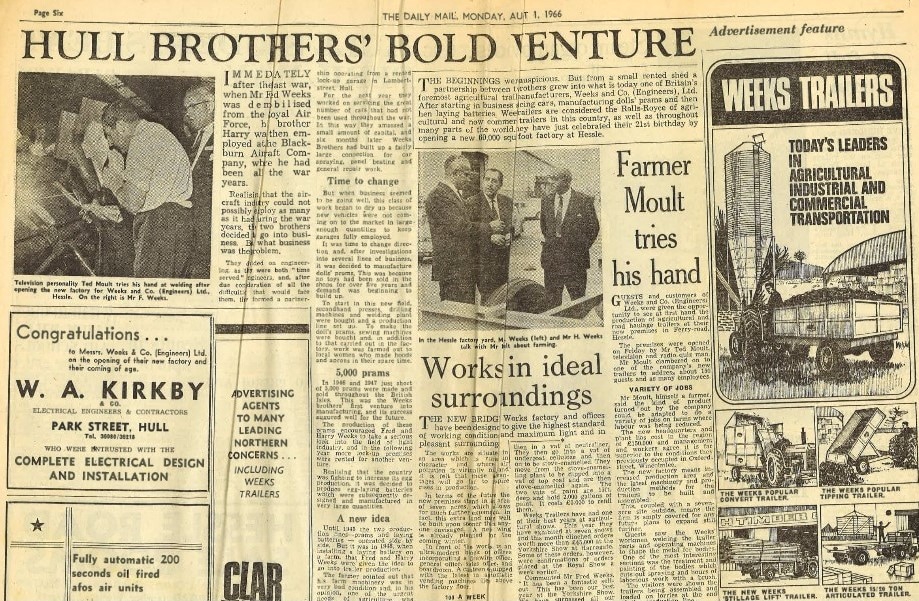 Hull Daily Mail, 1 Aug 1966.
As business started to expand, Fred and Harry agreed to invest their capital into yet another business venture, this time they decided to make hen batteries. When delivering and installing these large chicken coups to farms around East Yorkshire, the partners learned that the maintenance and production of farm machinery had suffered extensively during the war. The brothers then had a fantastic idea, they would buy old war vehicles which were being sold near Doncaster and make them into brand new trailers. The brothers got to work designing and producing the first Weeks trailer and delivered it to the farmer who originally sparked the idea. His response was that he wanted two more. The second Weeks trailer was produced and taken to Beverley market in 1948 where it received excellent reviews. In total eleven trailers priced at £125 each were ordered that day.

By 1949 business was booming and the rented lock up garage was no longer sufficient in size to contain the growing business. Eventually the pair agreed to open their new headquarters in a large old mill on Oxford Street in Hull.
The Weeks brothers were fantastic at interpreting the market and using their engineering skills to supply farmers with cutting edge technology. In 1961 advancements in cattle farming, prompted Fred and Harry to produce a high sided 3 in 1 trailer. This was a success from the outset. The business was expanding rapidly as Fred, Harry or a representative travelled all over the world to promote their products. The Weeks brothers also started to make industrial trailers which added further to the company’s success. To accommodate its growth, the business was moved to Ferry Road, Hessle in May 1968.

The factory is remembered by Fred and Harry’s children fondly and from their stories it is apparent that, although in the company’s most prosperous years over 300 men were employed, both Fred and Harry valued every worker and went out of their way to show their gratitude. The brothers ensured they could complete every task that they asked their workforce to perform so that they understood every aspect of their business. Fred and Harry had built an international business empire which not only presented them as pioneering entrepreneurs in the community but also on the world stage.
Footnotes
[1] 1901 England Census, RG13: 4486, 136: p. 72
[2] Hull Daily Mail, 7 December 1928, p. 2
[3] Hull Daily Mail, 9 April 1933, p. 10
[4] Hull Daily Mail, 14 July 1942, p. 1.
[5] Hull Daily Mail, 30 August 1938, p. 8.
[6] Hull Daily Mail, 2 Spetember 1938, p. 12.