In East Yorkshire During WWII
By Audrey Dewjee
More than 400 men from the West Indies flew with the RAF in World War II as pilots, navigators, flight engineers, bomb aimers, wireless operators or air gunners.  Some were stationed in East Yorkshire.
Before the 4,000 RAF ground crew men arrived at Filey in 1944, a number of other West Indians had already joined the RAF as air crew.  One of the first was Jamaican, William (Billy) Strachan.  He arrived in England in March 1940, aged 18, just three months after he had left school.  He had sold all his possessions (a bike and a saxophone) in order to pay his fare to Britain.  When he went to the Air Ministry in Kingsway, London, to apply to join the RAF, the guard on duty outside told him to shove off.  A sergeant came by and told him to go to his home town and join up.  Billy said there was no recruiting office in Kingston (meaning Kingston, Jamaica) and the sergeant said of course there was, meaning Kingston, Surrey.  Eventually a young officer came by and said he knew where Jamaica was – in West Africa – and took him inside.  After a medical and various tests of his ability, by 9 o’clock the next morning Billy was in the Air Force and in uniform. 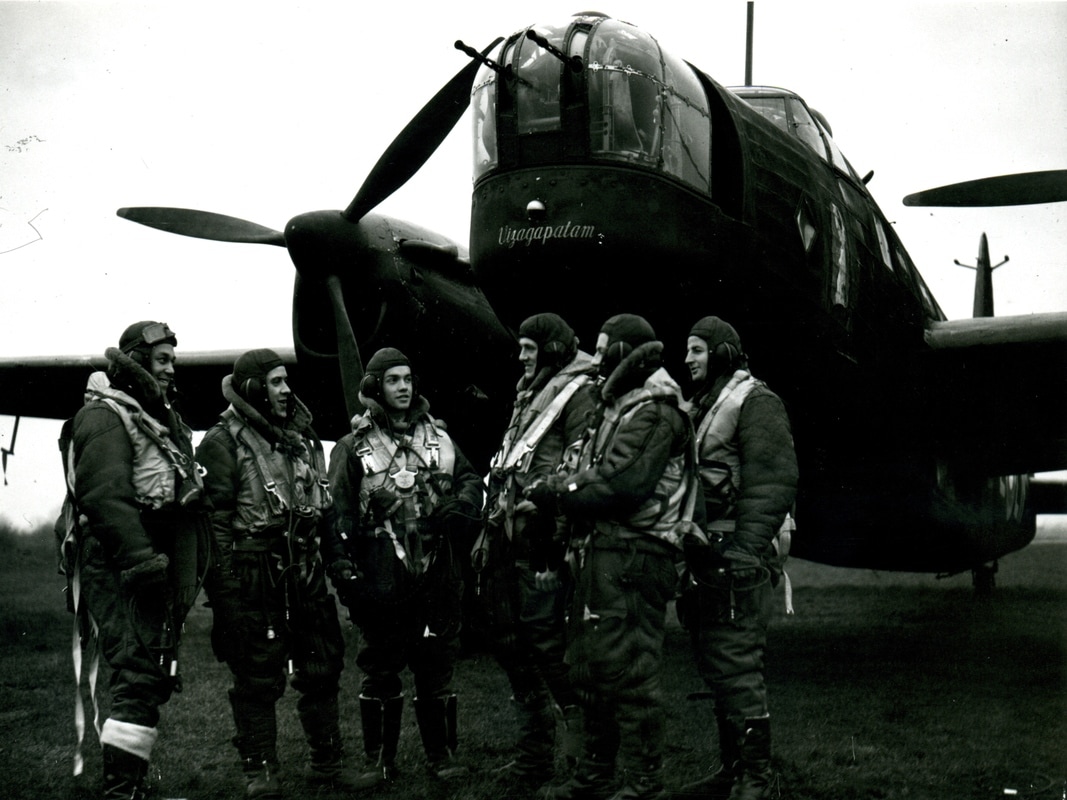 Billy Strachan (far left) with his fellow crew members. Their plane was named Vizagapatam in honour of the people of the district of that name in India who paid for its construction.
Billy survived his first tour of operations (30 missions) as a wireless operator/air gunner.  Many were not so lucky as the casualty rate in bomber command was very high.  He was then entitled to a job on the ground but instead he applied for pilot training, doing a further 15 missions as a pilot with 156 Squadron, a unit of the élite Pathfinder Force.  Starting out as a sergeant, Billy was promoted twice to Flying Officer and then Flight Lieutenant.

He was stationed in Yorkshire for a time at Brough, near Hull.  One day he was at the dentist having his teeth done in an underground surgery.  When he came back upstairs after his appointment, he found that RAF Brough had been bombed and all the buildings were gone.[1]

After the war he served as a liaison officer in the RAF sorting out racial disturbances before studying law and becoming a legal administrator in London.  He was a member of the communist party until 1967 and a political activist.
Three Jamaicans, Lincoln Lynch, Arthur Wint and John Blair, did their initial training together in Canada and remained friends throughout the war.  John Blair and Arthur Wint travelled to Britain together, sailing from Halifax, Nova Scotia, to Glasgow, where they were measured for their officers’ uniforms.  The pair felt strange when they first put on their new uniforms and went into an English pub full of white customers but “it soon became normal for them to walk into any pub full of strangers and within a few moments have someone walk over and say, ‘Please have a beer with me’.  This was Yorkshire and John Blair would always have fond memories of the ‘kind and friendly people’.”[2]

When they were fully kitted out, they were allowed three weeks’ leave in London at the end of which Arthur Wint and John Blair were sent on a Battle Course at RAF Filey.  “This course included the use of weapons in combat and many other aspects of infantry combat training.  The course of instruction was intended to prepare them for the possibility of being shot down over enemy territory and having to fight to survive, although in practice few RAF aircrew would opt to fight on landing after escaping from their burning aircraft.”[3]
After the course at Filey, the pair went to Scotland for familiarisation flying over the UK.  Navigating the wide open spaces of Canada had been relatively easy, whereas in Britain with a new town every few miles and a blackout in operation at night it was much more difficult.

John Blair eventually joined no. 102 (Ceylon) Squadron based at Pocklington, which flew Halifax bombers.[4]  Arthur Wint became a Spitfire pilot but where he was based for most of the war is unclear.  Further research is needed, and perhaps a reader of this article can solve the mystery.
He was billeted with a family near York which contained three little girls, Mollie, Betty and Margaret, who all adored him like a big brother.  Betty recorded, “he never spoke of his family:  we just knew he went to boarding school and had never experienced family life until he joined our family.”[7]

Mollie, the youngest of the sisters, remembered,
In May 2005, Lincoln and the sisters were reunited on a BBC1 TV programme, We’ll Meet Again, presented by Des Lynam and featuring Vera Lynn, which marked the 60th anniversary of VE Day.
Godfrey Petgrave The son of a Jamaican father and an Antiguan mother, Godfrey Petgrave ​enlisted in the RAF in Lagos as his father was working in Nigeria at the  time.[9]
Arthur Wint was a very tall man (height 6 feet 5½ inches) and a great athlete.  Known as the 'Gentle Giant', Arthur ran in competitions for the Royal Air Force.  After the war, he won a scholarship to train as a doctor and surgeon at St. Bartholomew’s Hospital in London.

In the 1948 Olympic Games, which were held in London, he became the first Jamaican to win an Olympic gold medal in the 400 metres.  He also won a silver medal in the 800 metres and probably missed a third medal when he pulled a muscle in the 4 x 400 metres relay final and was unable to finish.  He won a further gold medal as part of the Jamaican team in the Helsinki Olympics in 1952 which set the world record in the 4 x 400 metres relay, as well as another silver in the 800 metres.  He was awarded the MBE in 1954.
After returning to Jamaica in 1955, he had a distinguished career as a doctor in Hanover parish.  He served as Jamaican High Commissioner in London and ambassador to Sweden and Denmark from 1974 to 1978 after which he returned to his medical practice in Jamaica.  Arthur Wint died on 19 October 1992.
Footnotes
[1] Interview with Billy Strachan, 24 March, 1980.
[2] Caribbean Volunteers at War: The Forgotten Story of the RAF’s ‘Tuskegee Airmen’ by Mark Johnson, Pen and Sword Aviation, 2014, p.67.
[3] Caribbean Volunteers at War, p.71.
[4] Named Ceylon Squadron because the people of Ceylon (now Sri Lanka) paid for the construction of the planes.
[5] Caribbean Volunteers at War, p.52.
[6] Ibid, pp.87-8.
[7] Letter from Betty, 18 May, 2005.
[8] Letters from Mrs. Mollie Wray, 20 May & 9 June, 2005.
[9]  According to Lest We Forget: The Experiences of World War II Westindian Ex-Service Personnel, (p.74), Godfrey Petgrave “went to Bridlington near Filey in Yorkshire where he did his ‘square bashing’.”  This was probably at RAF Hunmanby Moor, Filey, rather than Bridlington.