African Stories in Hull & East Yorkshire
As the Second World War raged throughout the early 1940s, Britain looked to the Caribbean for volunteers to train as ground crew for the Royal Air Force (R.A.F). Thousands of men answered the call, with approximately 5,400 volunteers arriving in Britain to serve between June 1944 and the end of the conflict in 1945. Four thousand of these men did their initial basic training at R.A.F Hunmanby Moor, Filey.
Their results, qualifications and skills were all documented and sent to Britain. However, as Hedley Jones remembers, despite their skills West Indian men were only volunteered for certain trades due to racially discriminatory practices within the British forces.

While they waited to be called up, some of the recruits carried out a basic form of training in the Caribbean. This was later expanded upon in Filey.

GO TO GROUND CREW VOLUNTEERS
West Indian recruits at R.A.F. Hunmanby Moor, Filey.
The first contingent of West Indian recruits, consisting of 1,000 men, arrived in Britain at the beginning of June 1944. Their troopship, H.M.S Esperance, landed at Liverpool where they were greeted by cheering crowds, the R.A.F band and the Secretary of State for the Colonies, Oliver Stanley. Shortly after their arrival they were transported to East Yorkshire to begin their initial training. The men made their way to R.A.F. Hunmanby Moor, which had been requisitioned by the government in 1941 from Billy Butlin, who had started to build a holiday camp in the summer of 1939, just before war broke out.

Although the camp had some basic amenities, the accommodation provided was far from luxurious. The Caribbean recruits were greeted with,
As the first contingent settled in, the second group who had disembarked from H.M.T Harrower were making their way to the camp. In total, it is likely that in the summer of 1944, approximately 1,950 men from the Caribbean were based in East Yorkshire to complete their basic training which included drilling, weapons training and physical activities.
three other servicemen went to a shop in the town to send a photograph home. The shop assistant came running down the stairs; however, when she saw them, she got such a fright she ran to get a male colleague. [6] Eden also mentioned that if he went into a pub people would buy him drinks and wanted to touch his hair for luck.[7] He remarked that he didn’t mind local reactions to the Black servicemen because he knew they were not a common sight in the region.[8] He also stated that his overall experience in Filey was positive.
West Indian presence in Filey
The West Indian presence in Filey must have been something of a surprise to the local population. While some of the recruits from the Caribbean were white, the majority were of African descent. Thus, this was the first time that a large population of Black men had settled in the small town. However, racial differences did not seem to taint the West Indian experience as locals embraced their presence. Ted Bradshaw, who was a young man of 26 in 1944, remembered that the West Indian airmen used to attend Reighton Chapel on a Sunday.  “My mother and father used to entertain them and so did other people in the village.  They were thousands of miles away from home and some of them were very lonely.  We used to have supper in the chapel and a good old sing-song.  We enjoyed their company because they were happy-go-lucky lads.”[9] 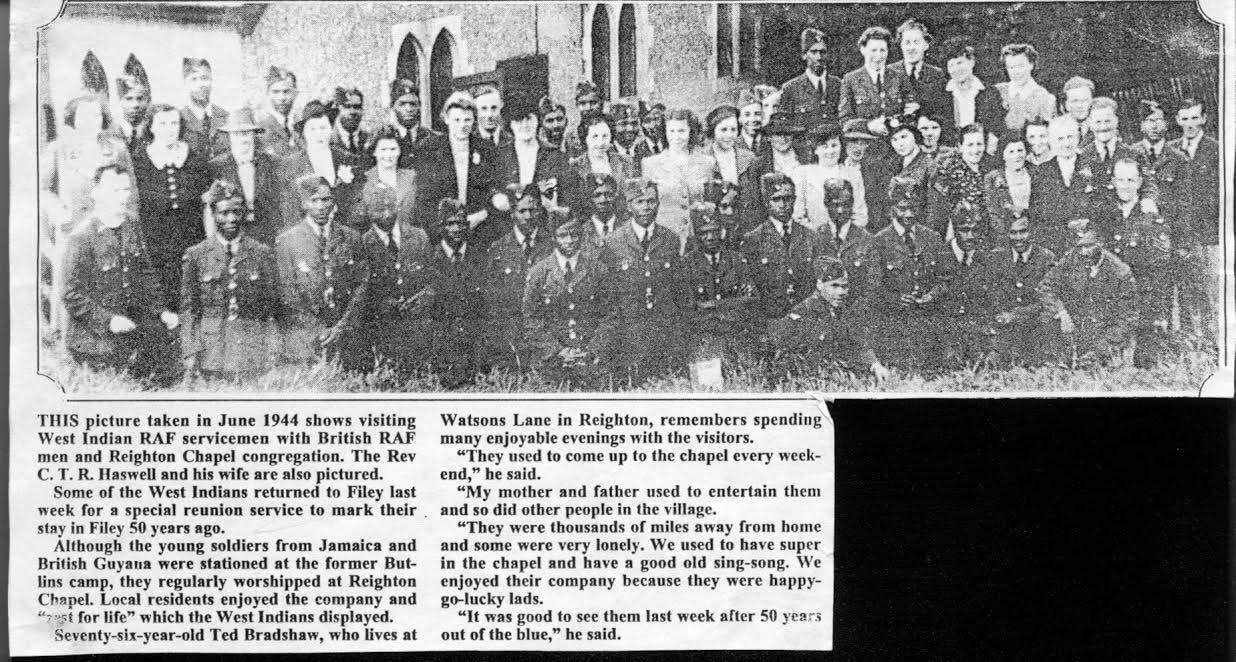 Although the residents of Filey embraced the West Indian volunteers, life was not easy in the camp. For those that landed in the winter of 1944, the weather was bitterly cold which led to ailments and on occasions fatalities. Brenda Grey remembered that because of the harsh East Coast weather many cases of pneumonia occurred in the weeks after the third contingent arrived in November 1944.

Although approximately 4,000 West Indian servicemen came to train at R.A.F. Hunmanby Moor, today their presence has been largely forgotten. However, if their story has triggered any memories and you would like to share your story please contact us HERE.
After the war
When the war ended in 1945, a few West Indian servicemen remained in the R.A.F. However, most were repatriated back to the Caribbean where nothing was done to help them find employment or settle back into island life. Thus within a few years, a number of the ex-R.A.F. men returned to Britain.  Many settled permanently and made important contributions to British life.

Click HERE to read short stories about some of the lives of the R.A.F. West Indian ground crew who trained at Filey.
Welcome Back
On Sunday 11 June 1994, around 40 of the men who trained at Filey returned to the East Yorkshire town for a reunion. After a parade, the West Indian veterans, high commissioners of Antigua, Barbuda, Barbados and the East Caribbean countries alongside Mike Cockerill, Mayor of Filey met at the Methodist Church for a special service. When reminiscing about his time in the region, ex- R.A.F. serviceman Laurent Phillpotts said that he could not believe that the Butlins' camp was gone. 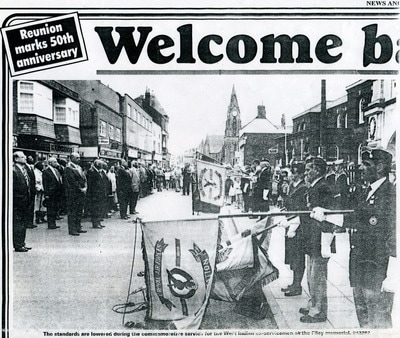 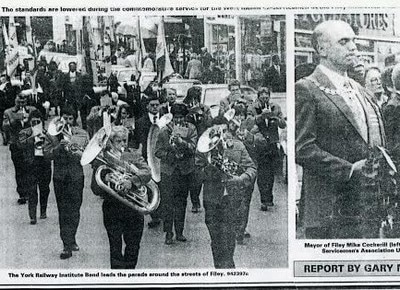 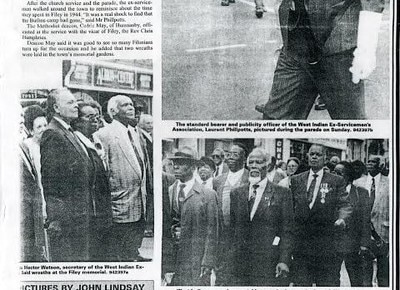 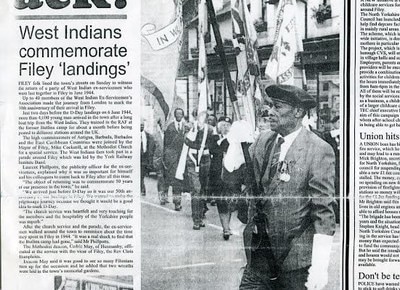