Abolitionist, Social Reformer and Fugitive Slave
by Hannah-Rose Murray
PhD student, University of Nottingham
William and his wife Ellen Craft were born enslaved in Georgia in 1824 and 1826 respectively. Ellen worked as a house servant, and when she was 20, married William, although by law in the South slave marriages were not technically legal. They were determined to escape as they were fearful their master would sell them separately further South, and they did not want their children to grow up in slavery. In 1848 they devised an ingenious escape plan: Ellen would pose as a gentleman with William as her manservant, and they would catch a series of trains and steamboats to the North.

It is a fair question to ask, how was this possible? Ellen was fair skinned as a result of her mother’s rape by her master, the plantation owner, and could pass as a white person. She could not read or write, as it was forbidden to teach enslaved people to do so, and to overcome this, Ellen strapped a bandage to her right hand to give her a reason not to be able to write. She cut her hair, bought men’s clothes and wore spectacles. They planned their escape at Christmas, as some slaves were given a few days off at that time, meaning it was likely they were not to be missed.

Their escape plan was incredibly dangerous: if caught, both William and Ellen would have been abused, tortured and most certainly separated to different parts of the South, never to see each other again. It was a huge risk and it is a testament to their bravery and genius that they pulled it off. When Ellen boarded the train for example, as was the custom, white people sat in a different carriage: she was by herself in a compartment full of white people and slaveholders, going on a journey which she had never done before. At one point she recognised one as a friend of her master and pretended to be deaf so she would not have to talk to them.

After this, American abolitionists decided that American soil was not safe enough for the Crafts and raised money to send them to Britain, where they remained for nearly two decades.

The Crafts were part of an abolitionist network in which hundreds of African Americans travelled to Britain to lecture against slavery, raise money to purchase enslaved family members or to live in Britain relatively safely from the violence they experienced in America. Ellen Craft became the celebrity at antislavery meetings because of her near-white skin, and both she and William carefully constructed their performances on a British stage. During the mid-nineteenth century, women – especially black women – were not expected to speak in public, so William would usually speak first and discuss their escape. Ellen would sit quietly on the stage and stand up briefly at the end of meetings to act as a symbol of the brutality of slavery and to silently confirm everything William said. British audiences were fascinated by their incredible escape attempt, and were shocked that a ‘white’ person like Ellen could ever have been enslaved, which highlights contemporary racial dynamics.

William described and defended their escape actions to a meeting held Bristol in 1851:

“He hoped that it would not be supposed that they gloried in the deception they had been obliged to practice in order to make their escape from bondage; but when the meeting considered what a degraded condition they were in slavery, that they were mere things, chattels, liable to be sold like the beasts of the field, and when they considered the happy prospect of freedom which was opened before them, and not charge the crime upon them, but upon the accursed system which had compelled them so to act in order to regain their God-given rights.” (The Bristol Mercury, Saturday April 12 1851)

Both William and Ellen travelled around Britain to educate people about the true nature of slavery and demanded their support in helping Americans abolish it. The Crafts learned to read and write in Ockham school, Surrey, and published the narrative of their lives in 1860. You can read this here - http://docsouth.unc.edu/neh/craft/craft.html

William spoke in Hull on Thursday 21 March 1861, apparently without Ellen, as an agent of the London Abolition Society. According to a local newspaper, his “narrative excited considerable interest and was delivered in a very able and prepossessing manner.” (The Hull Packet and East Riding Times, March 22 1861)

Shortly after this Hull meeting,William visited Dahomey (modern day Benin) to prove to the British government free-grown cotton could be grown in Africa, to prevent the reliance on slave-grown produce from America. Craft presented his findings to a meeting of the British Association in 1863, and was forced to challenge his views when Dr. James Hunt of the Anthropological Society loudly protested. Hunt proudly subscribed to scientific racism, in which all people of African descent were biologically declared physically and mentally inferior. Hunt declared African people had thick skulls with smaller brains, which explained their limited intelligence. In response, Craft mocked Hunt’s theories and declared all white people “were not Shakespeares” and thus not naturally intelligent as everyone claimed.

The Crafts returned to America in 1868 and opened a school for Black children in Georgia. Ellen died in 1891, and William followed in 1900.

Below: A map showing some of the speaking locations of black activists during the nineteenth century 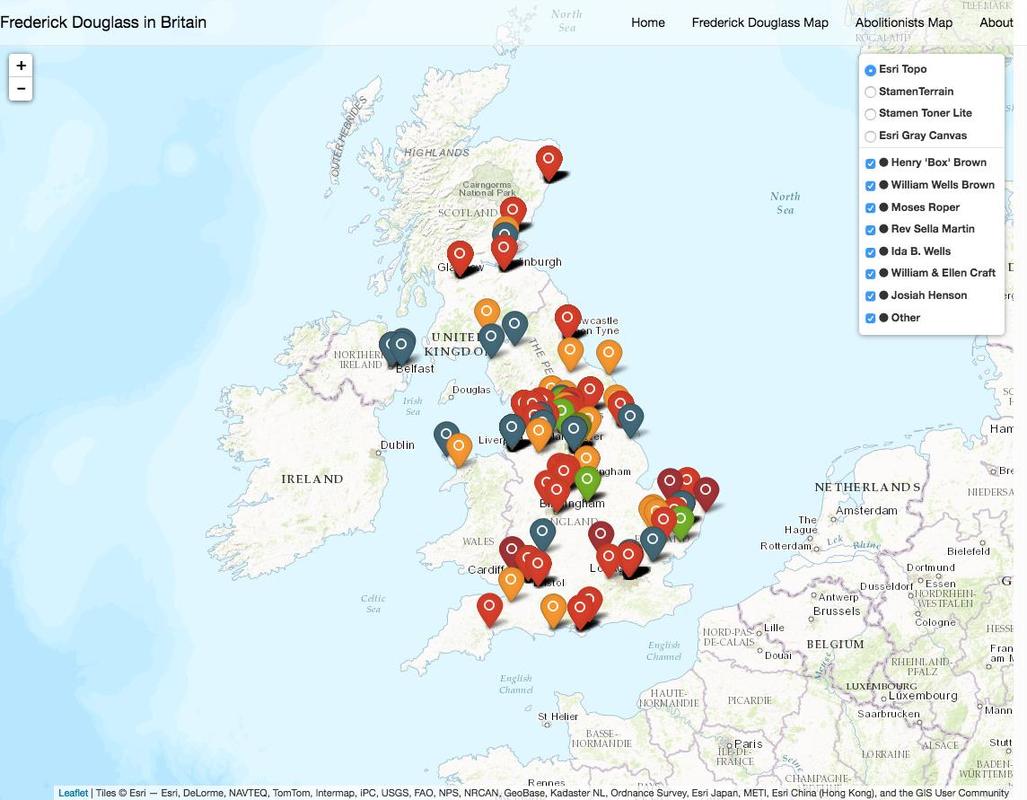