The Fisk University Jubilee Singers in Hull and East Yorkshire

"But the world listened only half credulously until the Fisk Jubilee Singers sang the slave songs so deeply into the world’s heart that it can never wholly forget them again.." W. E. B. Du Bois (1903) 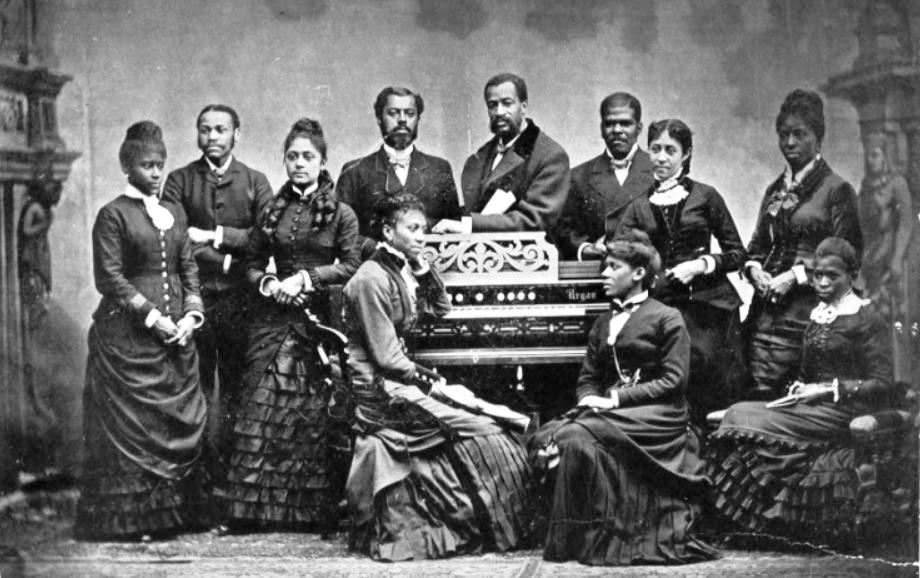 Frederick Loudin's Jubilee Singers, c.1882. L-R standing: Patti Malone, George Barrett, Matti Lawrence, C. W. Payne, Frederick Loudin, Benjamin Thomas, Mabel Lewis, Jennie Jackson. Seated L-R: Ella Sheppard, Maggie Porter, Ella Wells
Three months later, in November 1878, the Hull Packet were advertising the same show, this time being performed at Hull’s Theatre Royal.[6] Despite the advert’s suggestion that the ‘famous Jubilee Singers’ would appear during this evening, they were almost certainly not the singers from Fisk University who had disbanded four months earlier. Indeed, in the wake of the success of the original Jubilee Singers many other troupes were formed who copied the singers’ format and singing style and performed in various venues around the country.
Frederick Loudin's Jubilee Singers in Hull and East Yorkshire
As suggested, after their four year tour of Europe, the original Jubilee Singers troupe led by George White was disbanded in July 1878. White went on to form a private troupe the following year and when he retired in 1882, bass singer Frederick Loudin stepped in to form his own touring group, retaining the name 'Fisk University Jubilee Singers' although this incarnation was a private enterprise and never had any association with the university.[7] The group began with former Jubilee Singers Maggie Porter, Georgia Gordon, Jenny Jackson, Minnie Tate, and Maggie Carnes, and started a tour of Britain in 1884.[8]
Concerts in Hull and the East Riding: 1884 and 1885
On 1 September 1884, Loudin's troupe performed at the Wesleyan Chapel, Driffield to around seven hundred people. The Driffield Times reported that after the “request of many friends,” the “original company from the Fisk University” would perform “a rare musical treat.”[9] The newspaper later revealed that the eleven members of the company had been met with a “hearty reception.”[10] Loudin himself sang a number of solo pieces in his “deep bass voice” and “brought down the house” with an encore and gave an “interesting account” of the origin of the singers and their travels.[11] The company had made many changes over the months and was now made up of seven women: Mattie L. Lawrence (soprano), Patti J. Malone (soprano), Maggie A. Carnes (soprano), Belle F. Gibbons (soprano), Maggie E. Wilson (contralto), W. A. Brenchley (pianist), Georgie A. Gibbons (contralto) and four men including Loudin: Benjamin W. Thomas (bass), George E. Barrett (tenor) and C. W. Payne (tenor). The following September of 1885 the singers arrived once again to perform at Hengler's Circus on Anlaby Road. In addition they gave concerts again in Driffield in the same month and Beverley.
A Final Return to Hull and the East Riding: 1898-99
After spending their first two years touring Britain, Loudin’s Jubilee Singers went around the world, spending the following three years in Australasia, then on to India, China, Japan and Singapore, eventually returning home to Nashville. In September 1897 Loudin’s troupe returned to Britain with a different line-up of singers including his niece Leota Henson on piano.
The Hull Daily Mail reported the visit of the singers with the heading “Wilberforce Worshippers: An Impressive Visit” and the Eastern Morning News described the visit as “touching.”[12] The troupe’s visit to Wilberforce’s place of birth was also reported in America with the Washington Evening Journal describing how the singers had marched up the High Street “to a body accompanied by a big crowd “ and were “cordially welcomed” once again by the house’s resident Mr Massam.[13] The Journal also reported that the group “burst out singing ‘John Brown’s Body Lies Mouldering in the Grave’” as their forbears had done a quarter of a century before. Indeed, the Mail suggested that after renditions of ‘March on, and you shall gain the victory,’ followed by ‘Steal away,’ it was indeed “a score of years since the memory of Wilberforce was so honoured.”[14]
‘Well Travelled Singers’ A Hull Daily Mail interview with Frederick Loudin - 1898
school for ladies, and the authorities told us they had never seen the girls so excited.”
“How did they reveal their satisfaction?”
“Well, in rather a peculiar way. The Japanese do not clap their hands to applaud. They express their approval in a series of deep long-drawn sighs.”
“But with all your travelling, you can’t have any settled home.”
“No; that is the great drawback. We carry our home with us. Here is my home,” said Mr Loudin, indicating two large dress-baskets. “We cannot settle down. Another thing is that we make friends only to lose them. That being so, we have to make things pleasant among ourselves.”[18]
'And his soul goes marching on...'
By the time another group of Jubilee Singers came to perform again in Hull at the turn of the twentieth century, Loudin’s troupe had disbanded. Indeed, by 1903 Loudin was infirm and confined to a wheelchair after collapsing in Scotland during the singers tour of the country the previous year. He died in November 1904 at home in Ohio. Future troupes that visited Hull and the East Riding during the early part of the twentieth century presented themselves in different ways. The popular 'Fisk Jubilee Trio' visited often and were very popular.