Over the last two centuries the port of Hull has attracted a significant number of Black seamen. From the mid-nineteenth century, a constant stream of men from Africa and the British Caribbean colonies stepped off ships onto the docks at Hull. As members of a transient population, some merely visited the shore to spend their wages or used the port as a base until they could gain further employment. However, a small proportion settled in East Yorkshire, married and had children. Together these Black seamen contributed to the economic, social and cultural fabric of life in Hull.
Black Sailors Pre-1840
It is difficult to determine exactly when the first Black sailors arrived in Hull. However, it is probable that an African presence in the port existed long before the mid-nineteenth century. As Ray Costello has demonstrated, Black sailors were employed in British ships from the sixteenth century.[1] The prominence of Britain in the maritime world, increased level of shipping and domination in the slave trade meant that Black sailors frequently visited the ports of Bristol, Liverpool and London from the 1700s. Thus, given the fluid nature of employment in the maritime sector it is possible that a small number of sailors visited Hull in the eighteenth century.

The period after the abolition of slavery in the British colonies enabled increased mobility for men of African heritage. Those who wanted an adventure, to see the world or to move away from oppressive plantation life looked for work in the maritime sector. These men added to the Black sailors who were already present in the ports and on board vessels all over the world.
Black Sailors in Nineteenth-Century Hull
The first evidence of Black mariners in Hull feature in newspaper articles in the 1840s. Although it is difficult to determine names and reconstruct the individual stories of these men, these articles demonstrate that there was a small Black presence in the region. For example, the article below documents the crimes committed by Joseph Henry and his wife in 1844. While Joseph received a substantial amount of stolen cloth, Mrs Henry had been charged with receiving twenty sovereigns from two prostitutes who had robbed a Black sailor. We do not know anything about the Black mariner apart from the fact that he was a victim of crime while in the port. 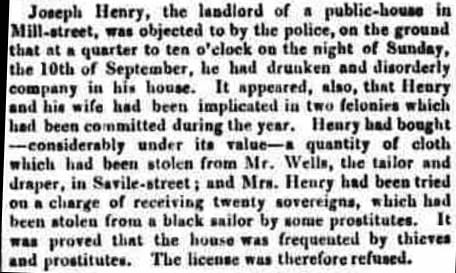 Hull Advertiser and Exchange Gazette, 23 December 1854.
In the 1880s two further articles demonstrate that Black seamen were active in the region. The first (see below) advises that Thomas Cass, a Black sailor was fined for being drunk and disorderly on North Bridge in August 1876.
Black Sailors and the First World War
In the early twentieth century attitudes towards non-white mariners began to shift. The rise of steam shipping in the 1890s increased the number of sailors of African and Asian descent employed on board British vessels much to the dissatisfaction of their white counterparts. Arguably, racial tensions were created because ship owners could exploit non-white seafarers by paying them lower wages and offering them the most undesirable positions on board their vessels. Campaigns to ensure that sailors were paid the same wages regardless of race were successful in 1911 which made the lives of seaman of African descent increasingly more difficult as their services were no longer cheaper than British sailors. Thus, they had lost their competitive edge in the labour market.

Their situation eased somewhat with the outbreak of the First World War as it provided sailors of African descent many opportunities for employment in the British maritime world. They were recruited for the Royal Navy, Merchant Marine and to work on the docks. Together these men contributed significantly to Britain’s war effort, although their stories remain peripheral to the history of the Homefront.
Hull Sailors Biographies
Below are the photographs of a selection of sailors who were employed on board vessels which frequented the port of Hull during or just after the First World War. Some lived in Hull while others simply visited the port while they waited for further employment or their voyages to resume (click on their photographs to learn more about their lives).
The Negative Attitude to Black Sailors after the First World War
Although Black seaman had significantly contributed to Britain’s victory, the end of the First World War brought racial tensions to the forefront. After peace had been restored in Europe, servicemen and sailors returned home which caused unemployment rates to soar. The competition for work intensified as did the anger towards immigrants who had ‘taken’ British jobs. It was not long before Britons forgot about the pivotal role played by men and women from the colonies during the war. Furthermore, questions were raised over the level of commitment and contribution of Black sailors during the conflict.

In the early months of 1919 letters flooded into the editor of the Hull Daily Mail defending or belittling Black sailors during the war. As can be expected seafarers of African descent argued they were courageous when facing the enemy and risking their lives for the nation, while white seamen portrayed Black mariners as cowardly and ready to abandon ship at any opportunity.
The formation of the Young Men of Islam association provided relief for Black seamen after arguments over wage reductions in the Transport sector engulfed the nation towards the end of 1921. Transport workers were advised not to handle coal imported from foreign dominions which severely impacted the shipping sector. However, they could not help every Black seaman and their funds were severely depleted after providing basic food and shelter. Thus, in order to ease the situation of Black mariners, it was decided that as the majority of the men lived in the Sculcoates area they should apply to the board of Guardians for relief. This demonstrates the poverty-stricken situation these men and their families endured during the depression in the wake of World War One.
Black seaman suffered extensively during the coal debacle. When shipping had been restored they could not gain employment because they had been debarred from signing up as crew on board British ships. As the articles below document, Black sailors waited patiently to be allowed to return to employment but they were desperate. Many of these men had families and children to support. However, according to the author of the first article many did not claim unemployment benefits, most likely because of their pride. The Black mariner who wrote the second article advised that he visited the docks everyday looking for work but was not able to gain employment. He declared that during the war Britain claimed Black colonists were citizens and when called upon they were happy to help the war effort. In the following emotive lines the author summed up the contribution of Black men during the war, ‘Many coloured men fought and died for this country, and some were wounded and perhaps disabled for life, and they wear silver badges to show how they took part in saving the homes of England.’ However, they had never imagined that after the conflict the very nation they had fought to protect would turn its back on them in their hours of need.
As the 1920s continued Black seamen found it increasingly more difficult to find work. The negative attitudes towards these men propelled motions forward to ensure that no further pressure was applied to the poor economic and social situation, with non-white sailors no longer being permitted to land in British ports without a good reason. Measures were taken to prevent ‘alien’ seamen from being discharged in the port of Hull unless ship owners or captains provided provisions for them to be repatriated to their birth countries.
The article below left advised that the authorities were alarmed at the number of Black seamen who were out of work. However, it acknowledges that these men were British subjects who had arrived in Hull in a variety of ways. It comments that responses to repatriation had been very poor and that ‘the men appear as though they would almost rather starve than go back to their own countries.’
A list of the names of Hull sailors of African and Middle Eastern descent
can be downloaded from our 'Records and Data' page HERE
Footnotes
[1] Ray Costello, Black Salt: Seafarers of African Descent on British Ships (Liverpool: Liverpool University Press, 2012), p. 3.
[2] Glenford D. Howe and Don D. Marshall (eds.), The Empowering Impulse: The Nationalist Traditions of Barbados (Jamaica: University of the West Indies Canoe Press, 2001), p. 21.
[3] Ibid, p. 21.
[4] Ibid, p. 21.
[5] Hull Daily Mail, 7 January 1927.