African Stories in Hull & East Yorkshire
John Kufuor is a Ghanaian politician and businessman. He served as the President of Ghana between 2001 and 2009. He implemented policies which focused on economic and social reforms which made important improvements in his home country. In 2006, Kufuor visited Hull to officially open the Wilberforce Institute for the study of Slavery and Emancipation.​
John Kofi Agyekum Kufuor was born on 8 December 1938 in Kumasi, Ghana. He was the seventh child of Nana Kwadwo Agyekum (who was Asante royalty) and Nana Ama Dapaah. Kufuor was privately educated at Prempeh College, a secondary school for boys located in his home city between 1954 and 1958. In 1959, he moved to London and enrolled at Lincoln’s Inn where he was called to the bar in 1961. He then attended Exeter College, Oxford between 1961 and 1964 graduating with a Bachelor of Arts degree in Philosophy, Politics and Economics. He married Theresa Mensah in 1962 and the couple have five children together.
Political Career

After completing his education in Britain, Kufuor returned to Ghana, where he launched his successful political career. In 1967 he became Chief Legal Officer and Town Clerk of Kumasi, the second largest city in Ghana. Between 1969 and 1972, he served as a Member of Parliament and Deputy Foreign Minister for Kofi Busia. [1] When the Busia regime was overthrown, Kufuor moved away from politics and became a successful businessman.
Kufuor worked hard to bring about reforms in his home country and because of his hard work was re-elected as President on 7 December 2004. During his second term, Kufuor strengthened Ghana’s position on the global stage by visiting various countries and cementing strong ties within the international community.
During his time as President, Kufuor implemented significant changes. He played a pivotal role in improving Ghana’s health care system by starting the National Health Insurance scheme and National Ambulance Service. He also improved the education system by endorsing the national school feeding program, extended the senior secondary school curriculum from three to four years and increased the number of children in primary school by almost a quarter. [2] The Kufuor regime also halved the level of poverty in Ghana and helped the gross domestic product to quadruple from £2.6 billion in 2000 to 11 billion in 2008. [3]
At the end of his second presidential term in 2009, Kufuor stepped down from office in accordance with the constitution. However, he has continued his good work in Ghana and in the wider global community. He has been part of a common drive for peace and economic development in Africa. In 2011 Kufuor received the World Food Prize for implementing policies which alleviated hunger and poverty in Ghana (Luiz Inácio Lula da Silva also received the award for his work in Brazil at the same time).
Kufuor in Hull

In July 2006, Kufuor was invited to open the Wilberforce Institute by patron Archbishop Bishop Desmond Tutu (read Tutu’s story). In his speech, Kufuor spoke about how it was an honour for him to give the opening address and praised William Wilberforce for his role in the abolition of the British slave trade. He said “The whole world is indebted to this city for the life of its son, William Wilberforce. The monumental achievement of Wilberforce and his group here in Britain went far to break the bonds of the slave trade, which is rightly described as the darkest era in the history of humanity.” [4] Kufuor ended his speech by presenting the Director of the Institute, David Richardson with a bronze statue of a slave breaking free from his chains which remains on display in WISE. Among those who attended the event were Hull MPs Alan Johnson and John Prescott as well as other notable people such Moira Stuart. [5]
A year later Hull celebrated the 50th Anniversary of Ghanaian independence. To mark this event, the Wilberforce Institute (WISE) held the Ghana Golden Homecoming Northern Event on 17 February 2007. [6] Guests included the Ghanaian High Commissioner Annan Cato and the Minister of Tourism and Diaspora Relations, Jake Obetsebi-Lamptey. Although, there were close ties between WISE and Ghana because Kufuor had opened the Institute in 2006, he did not attend this event. [7] However, he did return to Hull eleven years later, on 28 September 2017 when he was awarded the Wilberforce World Freedom Medal for his efforts in promoting democracy in Ghana. He was issued the medal at the first ever Wilberforce World Freedom Summit organised by WISE. Director of the Institute John Oldfield praised Kufuor for his policies during his presidency. He said, “He’s a remarkable figure, he’s made a huge contribution to really putting Ghana on the map, politically and socially, but raising its profile as a centre of democracy and good governance as well as an important part of the United Nations.” [8] 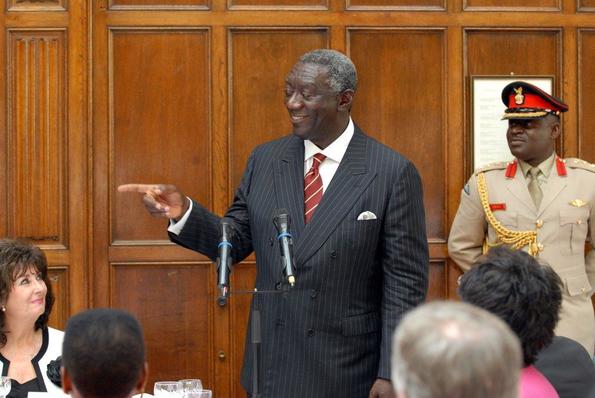 John Kufuor in Hull in 2006.
Footnotes