The drowning ​of Richard Lisles

The story of the events surrounding the drowning of an African American soldier in the River Humber in August 1820.​
By John D. Ellis
On a warm summer day a dip in the waters of the Humber is a tempting way to cool down, however, the river is dangerous; with fast currents and nomadic sandbanks proving fatal to the unwary. In mid-August 1820 the soldiers of the 52nd (Oxfordshire) Foot had been stationed in Hull for two months. The regimental Head-quarters, (RHQ), and the band were quartered in the Citadel, (today the area known as Garrison), whilst the rest of the regiment was serving in detachments in Halifax and Scarborough. That the soldiers should be tempted to bathe in the Humber was not unusual, however, one bandsman got out of his depth and drowned.[1] That man can now be identified as Richard Lisles, an African-American soldier.
He served in Canterbury until May 1816 when he joined the 1st battalion 52nd Foot in France, where it had served since the Waterloo campaign. In the band he was under the command of Sergeant John Kilbanks, a German veteran of Waterloo.[7] The 52nd Foot remained on occupation duty until November 1818 when they returned to England, with the regimental band being prominent on arrival at Ramsgate.[8] Under their Commanding Officer, Lieutenant Colonel Charles Rowan (1782-1852), the 52nd returned to a country in turmoil. The end of the Napoleonic Wars saw famine, chronic unemployment and political agitation for parliamentary representation. They found themselves immediately thrown into aiding civil powers in the Midlands. In February 1819 they were policing colliery disturbances in St Helens, and the following month acting as fire-fighters in Chester, duties for which the Chester Courant reported that they deserved the "highest praise".[9]
Charles Rowan had made a name for himself in the Peninsula and Waterloo campaigns, and his period in command of the 52nd in its "aid to civil powers" role, revealed him to have be as able and astute a diplomat as he was a soldier. Under Rowan the 52nd mounted a charm offensive where-ever they were stationed. In Chester, in March 1819, they gave "a magnificent ball and supper" to which "the beauty of and fashion of Chester city and county" were invited.[10] The band also participated in "keeping the army in the public eye," with the Staffordshire Advertiser describing them as "excellent" at a concert they supported in Lichfield in November 1819.[11] However, it was not all balls, bands and dancing. August 1819 saw the "Peterloo Massacre" and sixteen civilian deaths at the hands of the Manchester and Salford Yeomanry. Whilst the latter, unlike the men of the 52nd, were neither regular nor experienced soldiers, the incident inflamed tensions between soldiers, oft stereotyped as "brutal", and civilians.
In December 1819, elements of the regiment were stationed in Nottingham guarding a large quantity of ammunition against potential radical attack.[12] In January 1820, in Lichfield, the night guard was doubled and every third man slept with his weapon in anticipation of an attack by "a Corps of Radicals coming from Birmingham."[13]
Under Rowan's command the 52nd Foot were judged to have had a successful policing "tour", and this was to stand him in good stead when he eventually left the regiment. In June 1820 the 52nd were ordered north, arriving in York later that month, with elements en-route for Hull (where the Head Quarters, including the band, were to be stationed), Halifax and Scarborough.[14] The Citadel at Hull had long been depot to a number of infantry regiments, whilst deployments to Halifax and Scarborough were more traditional – the former being similar work to that recently undertaken in the Midlands, and the latter being anti-smuggling duties.
At half past seven on the morning of Friday 11th August 1820 Lisles was one of a group of soldiers who left the Citadel on the north bank to bathe in the Humber. Newly arrived, it is unlikely that the soldiers were aware that in the years preceding their arrival the Hull Packet had reported on several cases of drownings: From fishermen whose boats had capsized, to experienced sailors who had lost their footing on the docks, fallen in and been swept away by the currents.[15]
The Public Ledger and Daily Advertiser recounted what happened next:

​As the Black belonging to the band of the 52nd regiment was bathing in the Humber, he got out of his depth, and was drowned, in the presence of about dozen of his comrades; some of whom, it is said, were good swimmers, and yet did not attempt to render him assistance.[16]

It is not known what exactly what happened, but clearly the journalist concerned saw the inaction of the soldiers who "did not to render assistance" as being out of the ordinary. It might be that they were frozen with shock, fearful of trying to risk their lives in a rescue attempt – an unlikely scenario considering the initiative required to be a light-infantryman and the previous combat and policing experience of the men concerned, especially Sergeant Kilbanks. It could have been because either Lisles was personally unpopular (and therefore deemed undeserving of help), or because he was Black.[17]
Perhaps, it was simply that the men of the 52nd, hardened to death by years of campaigning and brutalised by policing duties had quickly and accurately calculated the risks involved in any rescue and deemed them too great.​
Paradoxically whilst Lisles met his fate watched by his erstwhile comrades, in 1826 the Taunton Courier, and Western Advertiser reported the heroic efforts made by a Black man of the 32nd (Cornwall) Foot who dived into French Weir, Taunton, in order to rescue a man swept away whilst bathing.[18] Even though it became clear that the man must have drowned, the Black soldier "courageously and skilfully dived into various parts of the stream, and at length brought up the corpse."[19] The newspaper reported that he was rewarded with £3 by benevolent onlookers, but failed to mention his name.[20]​
The body of Richard Lisles was buried on Saturday 12th August 1820 in the cemetery of St Peter's Church, Drypool, with the service being conducted by Reverend Richard Moxon, the Curate of Drypool and Sutton.[21]​
Postscript: People

John Kilbanks, Band-Sergeant of the 52nd Foot, was discharged on a pension in Dublin in 1821, and died in Brighton in 1849.[22]
Charles Rowan took the 52nd to Ireland in 1821, and resigned his commission the following year. In 1829 he was approached by Sir Robert Peel and invited to become one of the two founding Commissioners of the new Metropolitan Police. Rowan provided the military discipline and organisation, (the "beat system", military "drill" and high standards of personal conduct were apparently modelled on the 52nd Foot), and barrister Richard Mayne the legal expertise. Rowan was made a Knight Commander of the Bath, (KCB), in 1850 and died in London 1852.​
Reverend Richard Moxon became Curate of Ilkeston in Derbyshire. He died there in 1836 aged 44 years, with his obituary noting that he was brother to Mr B. Moxon, druggist of Hull.[23] Years later Moxon was still remembered fondly by one Ilkeston parishioner:

"Is there a single individual in Ilkeston who can say aught disrespectful of that excellent man? I, and very many others, have much to be thankful for to him. The pains he took to assemble us on the Sunday afternoon, to explain to us the scriptures; the benevolent smile he gave as we vied with each other in answering the questions he put, were more than enough to repay us: and he, I have no doubt, has his reward."[24]​

Postscript: Places
The Citadel, Hull. Military use of the Citadel stopped in 1848. In the 1860s it was sold and the land cleared. All that remains today is a single watch-tower at the area of Victoria Dock.​ 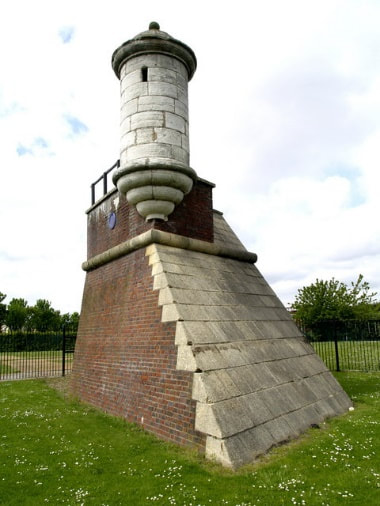 The Citadel, Hull. Image copyright Andy Beecroft.
A lithograph showing Drypool Church c.1822. By 1822 St Peter's Church was in such a state of disrepair that it was demolished. Reverend Moxon preached the last sermon on the text: "But the end of all things is at hand." (Peter: VII). The churchyard was closed to further burials in 1855.[25]​ 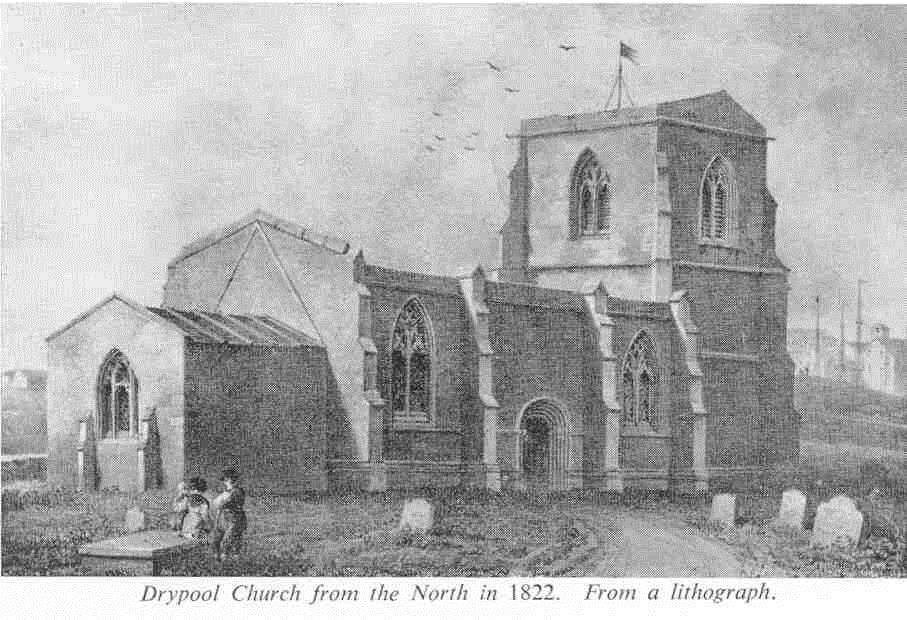 The 52nd (Oxfordshire) Regiment of Foot went on to serve in the Indian Mutiny (1857-1858). With them was Lieutenant Reginald Wilberforce, the son of William Wilberforce of Hull. In his memoirs Reginald Wilberforce referred to his service in the regiment as "…a distinction that I cherish to this day…"[26] They are one of the antecedent regiments of "The Rifles", a regiment that recruits heavily in Yorkshire.
John Lewis Friday
Read about John Lewis Friday, ​another infantry soldier from the early 19th Century.
Friday's story >>
Footnotes

The initial research that provided the basis for this study was undertaken for my MA thesis, and a synopsis can be provided on request. JD. Ellis, "The visual representation, role and origin of Black soldiers in British Army regiments during the early nineteenth century." (Unpublished MA thesis, University of Nottingham, 2000).
​