The story of the Wyng family, notable for the marriage of Hull-born Margaret Wyng and West African chief Ben Simmons in September 1929.
by Audrey Dewjee
Margaret Lily Lenora Wyng was the daughter of James Emmanuel Wyng, an African American sailor/ship’s steward from Boston, Massachusetts.  In November 1897, aged 26, he married Margaret Elizabeth Catchpole, the daughter of a local sailor, aged 19, at the church of St. Nicholas, Great Yarmouth.​
Eighteen months later, Margaret was born in Hull, followed by a sister, Venus Ivy, on 29 September 1900.  In the 1901 census the family were listed as visitors, staying in the same house as Margaret’s mother in Ribble Street, Hull.
Two sons followed:  William Emmanuel (Billy) Wyng was born in Sculcoates on 2 December 1902 and Mark Walter James Wyng on 27 January 1905 in the Fylde district of Lancashire.  It is likely the family had moved there so that James could find work, however, just a short while after Mark’s birth, his father died at the age of 34.
With four young children to raise, Margaret moved back to Hull, no doubt to seek the help of friends and family.  In 1907, she married John Dale and their son, Arnold, was baptised on 21 December 1909.  Tragically, Margaret again lost a husband within a few weeks of the birth of their child.
Margaret (née Catchpole) was married for a third time to Sidney J. Bell, who fortunately survived long after the birth of their two daughters, Sunday and Lily.
Three of the children of James and Margaret Wyng made entertainment their chosen careers.  All three were talented singers and dancers.  The Hull Daily Mail of 19 February 1920 reported that “an excellent entertainment in aid of the Newland Orphan Homes was given at the Hessle-road Bethel last evening…The chief items were contributed by Misses Venus and Margaret Wyng, two step daughters of Skipper Bell, both of them clever dancers.”

Hull Daily Mail - Thursday 19 February 1920, p.4.
By the time of her marriage in December 1920, Venus was the principal of the Hessle Common Juvenile School of Dancing.  Her wedding to Sidney S. Bell (perhaps a relative of her stepfather) was reported with a photo in the local paper.  Margaret Wyng, Lily and Sunday Bell were bridesmaids and Billy Wyng was best man. 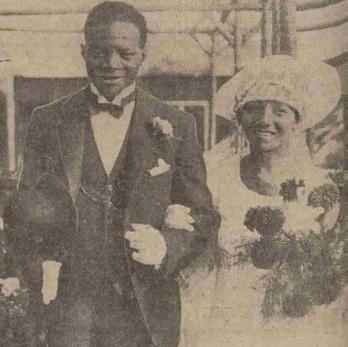 Mark Walter Wyng also got married in 1929, to Ivy Whitfield, and they had at least one daughter, Myrtle, born in Sculcoates in 1930.  He was the only child of James Emmanuel Wyng who didn’t seem interested in a performing career.  He followed in his father’s footsteps and became a seaman.
Parts for mixed-race performers may have been limited, but in March and April 1931 Margaret Wyng, “the Creole Nightingale,” along with her brother Billy, billed as “a dusky hobo in syncopated songs,” found work in a touring production called Dips, in Numerous Plunges – a cabaret show whose ingredients were said to be “real novelty entertainment, music, mirth and mystery”. [5] Although the show visited a number of provincial towns, including Nelson, Andover and Tiverton, advertisements of the production’s availability in The Stage around that time indicate that it was not a great success.​

The Stage - Thursday 23 April 1931, p.20.
Seeking further employment, Billy and Margaret then tried taking out their own advertisements in The Stage in June and August.

The Stage - Thursday 20 August 1931, p.22.
Exactly what happened next isn’t known, but a year later newspaper reports indicate that things had gone badly wrong for Margaret.  On 31 August 1932, Ben Simmons, described as “a coloured man, a native of the Gold Coast…a singer for gramophone records, and living in Great St. Andrew-street, London,” was sentenced to three months’ hard labour for razor slashing a white man, James John Taylor of Eagle Street, Holborn.  Taylor said that Simmons came up to him and asked for a shilling to which he replied, “Why should I give you a shilling?  I don’t know you.”  Simmons then took a razor out of his pocket and slashed at Taylor, cutting two of his fingers.  The policeman who arrested Simmons reported that he had remarked, “I did it in self-defence.  He hit me first.  I would have cut him to ribbons if you had not interfered”. [6]
Things got even worse.  On 1 September 1933, Simmons was in court again.  This time he was charged with wounding Ah Foo, a Chinese kitchen porter…and stealing a suitcase.  “At a previous hearing it was stated that a number of Chinese who had paid registration fees for film work went to a house in Shaftesbury-avenue and demanded work or the return of their money. One of the visitors, Ah Foo, was seized on the staircase by Simmons, who was alleged to have stabbed him in the leg and pushed him with such force that the whole of the banisters were broken down.” [7]
Simmons was lucky.  The prosecutor informed him that two other charges of obtaining money by false pretences were being dropped, and “the doctor was not prepared to say that Ah Foo's wound was caused by a knife, as was at first supposed, and counsel asked for that charge to be reduced to one of common assault.”  As a result, Simmons was convicted for theft and assault and sentenced to six months’ imprisonment.  During the trial, Detective-Sergeant Greenacre informed the court that Simmons had been convicted of theft and fraud in London and several provincial towns. [8]
As a further breach of conduct, Ben Simmons made yet another appearance in court a year later – this time at the Old Bailey, charged with taking a 13-year-old girl out of the custody of her mother, without the mother’s consent.  It seems he met the girl while working at a fair in St. Albans and took her back to London.  She was away from home for a week.  Simmons pleaded guilty and was sentenced to l5 months’ hard labour, with a recommendation that he should be deported.  It was stated in court that Simmons had been dealt with on eight other occasions for various offences. [9]
On Friday 7 April 1933, the Hull Daily Mail advertised that a Grand Sunday Concert in aid of the Hesslewood Orphanage would be held at the Alexandra Theatre, in which one of the performers was “Miss Maggie Wyng, Soprano (late Show Boat Company, Drury Lane)”. It has been difficult to find any more details of Maggie’s career after this date, and it seems a shame that a singer of such talent was unable to achieve more success.  However, in early 1935 she married James T. Newman in Liverpool and it is to be hoped she found happiness with her second husband.
The siblings later moved around the country. Billy died in Sheffield in 1970 and Venus in Birmingham in 1977. Mark died in Gloucester in 1987 and Maggie died at Cheltenham in 1985.