SCARBOROUGH
By Audrey Dewjee
The Yorkshire coast is blessed with a number of beautiful seaside resorts which have attracted holidaymakers, entertainers and people seeking employment for the last 300 years. Scarborough became famous in the 17th century as a spa and by the 1730s it had become Britain’s first seaside resort.  As such it attracted wealthy visitors who often brought their servants along with them for their visit.
Africans, such as John Pittess, ‘Negro servant to Captain Winter’, were baptised in the town from time to time.[1]  Thomas Matthew Pompey, in 1765, George Hill in 1767, and John Amity ‘being an Adult and a Blackamore’, in 1782, are other examples of baptisms which took place at St. Mary’s Church. 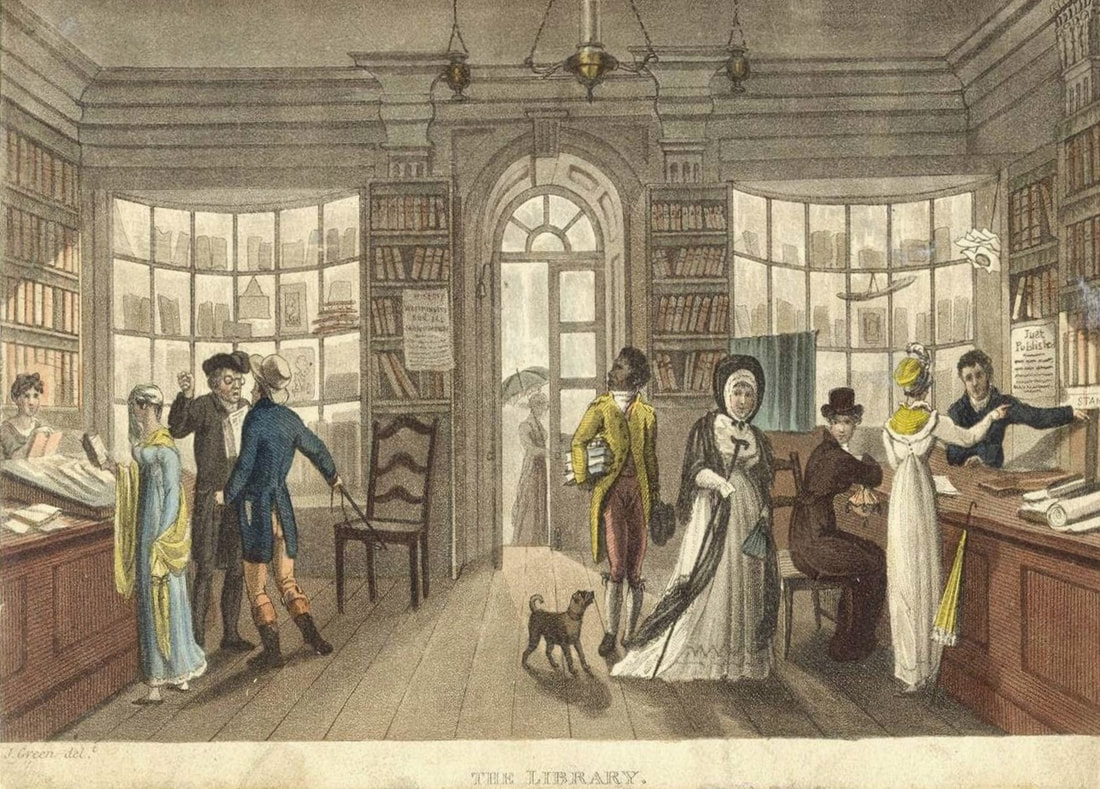 Scarborough Library in the early 1800s from the book “Poetical Sketches of Scarborough,” 1813.
Snippets of information about people of African descent surface from time to time in newspapers, census records and books about Scarborough.

​James Edward Philadelphia Moore was a flower-seller who lived in Scarborough for several years at the turn of the twentieth century.  For more of his life story, click here.

In his memoirs, Osbert Sitwell recorded that his elder brother had a rug, ‘unusual in design and bold in colour, [which] he had commissioned at the age of seven from an old negro whom he found in the workhouse at Scarborough.’[2]  This would have been about 1904, as Sacheverell was born in 1897.

John Fraser “a young man of colour who was well known in the town” died when the fishing smack the Rambler was lost at sea in October 1869. [3] He, and John Thomas Lewis, born in Africa, a firewood dealer, recorded in the 1891 census, were others who lived in Scarborough. 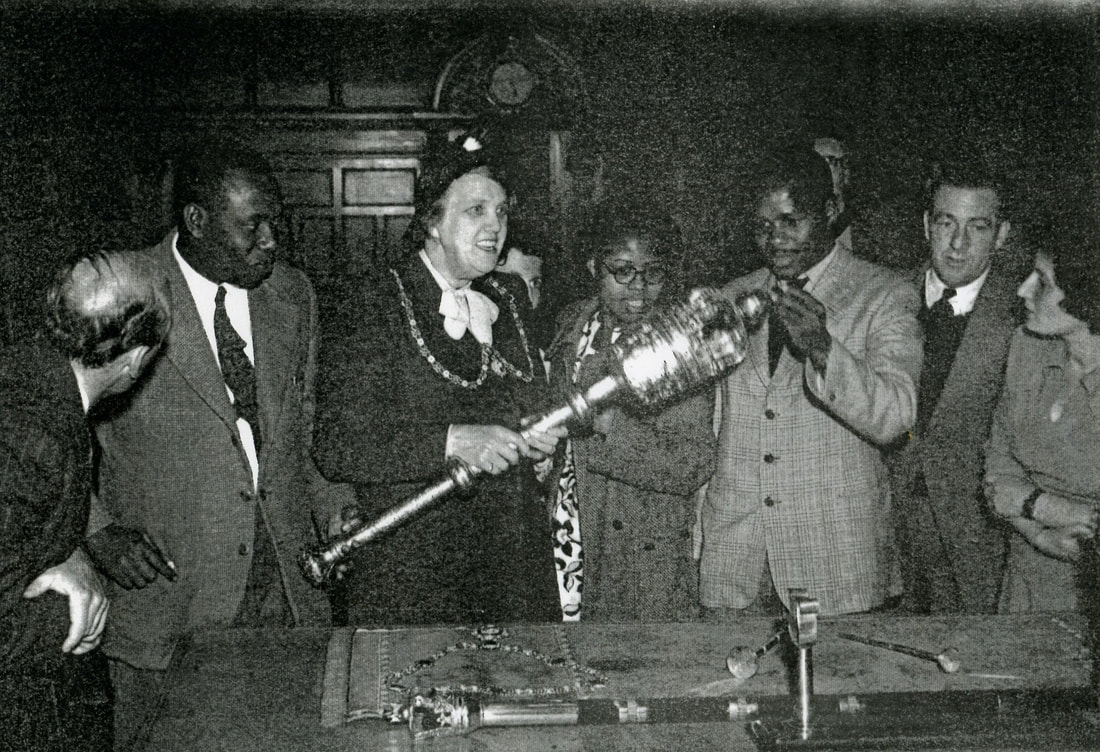 Visitors to Scarborough (possibly under the auspices of the British Council) at an unknown event thought to have taken place just after World War 2. The woman with the chain of office is probably the Mayoress. From the Collection of NYCC Libraries Scarborough
​Performers
Wealthy visitors were naturally in need of entertainment, so performers of many kinds were attracted to the area.  Early in his career, on 23 and 25 August, 1831, Ira Aldridge gave performances in Scarborough for which he received high praise.[4]

Half a century later, his son, Frederick Olaf Ira Aldridge (known as “Fritz”) also found employment in the town in 1886, first as conductor with Mr. T. D. Yorke’s comic opera company, with whom he had been touring, and then as pianist at the newly opened Aquarium.  The previous year, when he and his sister Luranah organised a concert in London, Mr. F. Ira Aldridge was described by a critic as “a young pianist of good promise” whose performance in a duet with Miss Nellie Chapman and a solo piece “went off very well”.[5]

After a week at the Aquarium he started to feel ill and, after another few days, he was compelled to stop working and the doctor was called.  A sad little notice was placed in The Era of 27 August saying that he was “resting for a week or two through illness.”  However, even before this advertisement appeared, Fritz was dead.  The following week, The Era published a dramatic account of his final hours:
​He was buried on 30 August, 1886, in a multiple grave in Dean Street Cemetery.

The original Fisk Jubilee Singers performed in Scarborough on a number of occasions on their tours to raise money for Fisk University.  They came to Scarborough in early August, 1873, just after the start of their first tour of Britain.  In Dark Midnight When I Rise, Andrew Ward gives some details of this visit.
​The Jubilees lodged with “a prohibitionist town councilman” named Whittaker and, according to Ward, “were squired around Scarborough’s fashionable attractions” by Joseph Rowntree, the Quaker chocolatier.[7]

Tenor, Benjamin Holmes, recorded the scene as they prepared to leave Scarborough,
​The original Fisk Jubilee Singers paid a return visit to Scarborough on 18 September, 1876, during their second European Tour.

In April 1884, a new troupe of Fisk Jubilee Singers under the direction of Frederick J. Loudin was formed.  This was a commercial venture, intended for the benefit of the performers and not Fisk University.  Including several members of the original group, it set off to tour the world, starting in Britain.[8]  After some initial success, concerts in London and the south ceased to make money as it was “so warm that all indoor entertainments were failures”.  The group therefore went to Scarborough, which Loudin described as a place of “surpassing beauty”, for a six week vacation during which plans for their forthcoming engagements were made.  Perhaps today photographs of them in Scarborough lurk unrecognised in some dusty archive or old photograph album.  If so, it is to be hoped that they come to light one day in the future. 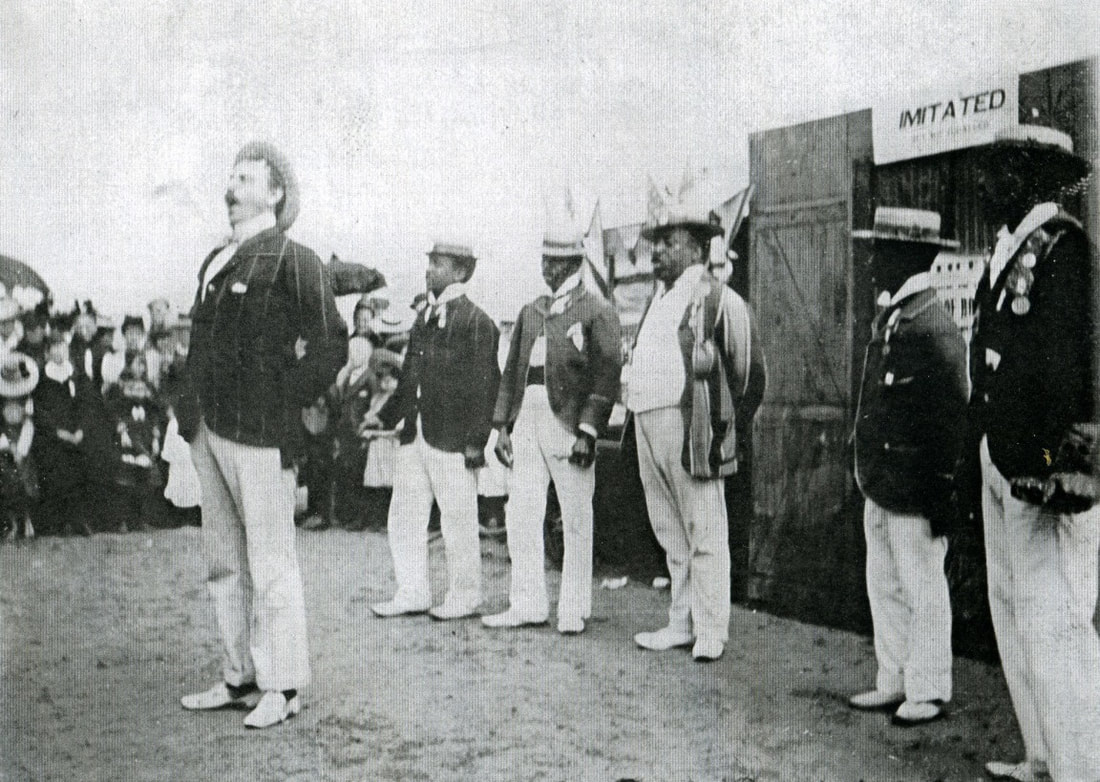 A group of entertainers on the beach, c.1900. From the Collection of NYCC Libraries Scarborough
The outstanding success of the Fisk Jubilee Singers encouraged other choirs to tour the United Kingdom and several appeared in East Yorkshire.  The African Choir, a group of 14 young men and women and two children, performed in Britain from 1891 to early 1893.  According to the Yorkshire Herald, and York Herald, they appeared in Scarborough on 17, 18 and 19 September, 1891, at the Spa Theatre and on Sunday, 20 September, they gave a sacred concert at the Bar Congregational Church.

Their usual programme was divided into two halves: one half consisted of English hymns and popular operatic arias and choruses sung in English, and the other of traditional African hymns and folk songs.  They performed half the concert in “native dress” to appeal to Victorian audiences, and half in their normal clothes.  Stunning photographs of members of the Choir were taken while they were in London and in 2014 these were included in an exhibition, The Missing Chapter: Black Chronicles II, held in November 2014, at Rivington Place, the UK’s first public space dedicated to diversity in the visual arts.
Footnotes
​[1] Baptised 19 January, 1798 at St. Mary’s Church.
[2] O. Sitwell, The Scarlet Tree (London: Macmillan; Reprint Society, 1951), p.287.
[3] Information from Scarborough Maritime Heritage Centre.
[4] A Critique on the Performance of Othello by F.W.K. [or Rather, Ira] Aldridge, the African Roscius.  By the Author of “The Talents of Edmund Kean Delineated” [i.e. John Cole, of Scarborough], Etc., 1831.
[5] The Stage, 10 July, 1885, p.14.
[6] The Era, 4 September, 1886, p. 9.
[7] Andrew Ward, Dark Midnight When I Rise, (New York: Farrar, Strauss and Giroux, 2000), p.233-4.
​[8] Loudin’s group toured for six years, performing in Australia, New Zealand, India, Singapore, China and Japan.