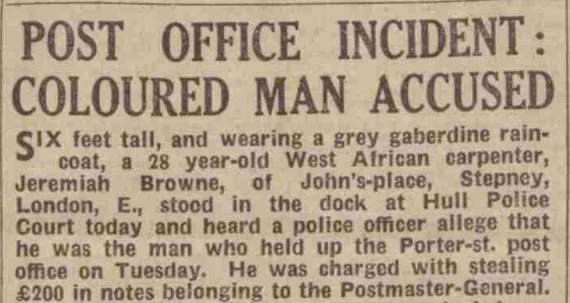 Hull Daily Mail, 16 January 1947, p. 4
As well as being a factor in provoking criminal actions, institutional racism and prejudice about men of African descent also contributed to criminals being convicted when they were not necessarily guilty. For example, on 15 May 1920, Henry Roberts, a 25-year-old ship’s fireman, who lived at 6 Botanic Place, Hessle Road, appeared in court after being charged with striking Abraham Brammeld with a knife. However, although he had been found in possession of a blade insisted he had not carried out the attack pointing out that there was no blood on his knife.[21] In addition, while Roberts was identified by one witness, the other two witnesses could not pick him out of the police line-up.[22] Furthermore, on 14 January 1947, Porter Street Post Office in Hull was robbed at gun point. The man accused of the offence was 28-year-old carpenter Jeremiah Browne. It was alleged that the West African had threatened three female members of staff and stole £200. After he had taken the cash, it was believed he ran and hid in a house in Rifle Terrace. When discovered, Brown did not have a revolver in his possession nor the stolen cash. He only had a return ticket to London on his person when arrested. Mr Stephen the prosecutor accused Browne of hiding the gun and money in one of the many bombed-out buildings because he had a rubber band in his pocket which could have been wrapped around one of the bundles of notes. However, the carpenter insisted that there had been around a bundle of £50 in notes of his own money. Browne denied any knowledge of the theft and insisted that he had only travelled to Hull to visit a friend. Interestingly after he had been arrested, the West African had objected strongly to the identity parade since he claimed that all the men in the line-up were lighter skinned than him and thus it was not fair. In Browne’s defence Percival Stanley Bullard, the regional officer of the Colonial Office’s welfare department told the court that he was ‘an honest, respectable and industrious man.’[23] Brown was first bound over on condition he would returned to West Africa. However, he refused and thus was sentenced to three years penal servitude.[24]

The crimes committed by people of African descent were typical of those which took place in other port cities such as Cardiff and Liverpool. They were property offences, violent crimes and minor infractions, all of which were usually committed by sailors or people living within the maritime quarter regardless of race or nationality.

​It is important to note that very few women of African descent appeared in front of the regions courts as perpetrators. As with broader historical trends in criminal profiles, the offender was most commonly a young man. However, with minority groups the ratio of male to female offenders is more pronounced because of their migratory patterns.
crimes and that he had been charged 13 ​times previously, Crowd told the court that he was an army veteran and received 24 shillings per week presumably, so he would be shown leniency. The magistrate sentenced Crowd to three months in prison and inferred that he would have added hard labour to his sentence but that would have also meant a loss of his Army pension.[26] In other cases, the reasons behind why a person committed property offences are difficult to ascertain. Sometimes it may have been impulse, a misunderstanding or greed. Very few offenders of African descent appeared in front of the court on multiple occasions. Of course there were exceptions like Crowd and Frederick Harold.
In the 1920s, many men like Kwamina Annan Sey, who claimed to be the son of an African chief, confessed in court that stealing was a last resort. Although, the perilous situation of Black men eased somewhat in the 1930s, it was difficult for them to find work until the Second World War.
saw her brush-off as a rejection and later forced his way into the fish shop and followed her through the kitchen where he attacked her with a razor.[32] In total she needed 146 stitches. Atkinson was arrested and pleaded guilty stating that he didn’t care if he received a sentence of 20 or 50 years, he committed the crime of wounding with intent to cause grievous bodily harm. Surprisingly, he was granted bail. However, he threatened Mr Elmi and was rearrested spending the time until his sentence in police custody. He was eventually taken to the York Assize Court for sentencing and received 7 years imprisonment.[33] Crimes of passion were committed frequently within the maritime sector with terrible consequences as in the case of Prince Eugene Bullen and Ada Saltus, and George Emanuel Michael and Theresa Hempstock.
Alongside knives and razors, guns also sometimes found their way onto the streets around the port. This was particularly evident in the 1920s. In May 1920 Senegalese ship’s fireman, Alphonso Dragner was tried at the Yorkshire Assize courts for shooting James Thomas Portz in Mytongate. During his trial, the African insisted that the victim had called him ‘a black nigger’ but he was innocent, and his friend another man of African descent had fired the revolver.[34] Weapons were also found on some of the Black men arrested in the race riots. Again, firearms were present in the maritime community and were carried especially in the 1920s by men of African descent to protect themselves against racial violence.
Petty Offences
Alongside the more serious offences of stealing and violent crimes, people of African descent did appear in court for a range of petty offences. Whether they were more likely to be arrested because of their skin colour is difficult to ascertain but it is possible. In June 1917, Charles Williams, an Army veteran, was charged with obstructing the footway in Posterngate. He remarked, “We coloured people have no chance here; we are treated like dogs.” He went on to state that he had been discharged from the army around one week ago and was waiting for his wife when the officer came up to him asking how he was living. Williams said that he was living on his pension, so the police officer hit him and nearly knocked him over. The police officer denied these allegations and said Williams would not move from blocking the pavement.[35]
Victims
​
On occasion Black men were attacked due to racial stereotypes. In the 1920s, there was a belief that all men of African descent carried a knife which led to various heated exchanges and sometimes violent attacks on innocent people. In June 1927, James Creighton who lived in Prior Street assaulted Charles Williams, ‘a coloured man’ of Warwick terrace, Warwick Street in Hull on Drypool Bridge.[37] Williams declared that Creighton shouted “Now, you black _______, have you a knife?”[38] To which he replied that he did not carry one, and when he went to walk away Creighton asked him why he didn’t go back to his own country. The defendant then struck him in the mouth. Creighton denied the charge of assault and alleged that Williams had previous threatened to stab him which is why when the pair met on Drypool Bridge and when the plaintiff had put his hand in his pocket, he believed he was reaching for a
Concluding Remarks

Although crime is a difficult subject and the exploration of criminality often casts a negative light, court records and reports are extremely useful for charting those who left no other trace of their life behind and whose stories therefore have been lost. In addition, in cases which were deemed unusual or the criminal was of interest, the records contain rich biographical data. For example, through an article in the Hull Daily Mail, readers learned that William McPherson, who was born in Norfolk, Virginia worked in the US Navy in his late teens. He then travelled to Britain in 1901 with the Walhalla Troupe, a comic opera group. With them McPherson visited Germany and stayed there for five years performing around the country. After the tour, McPherson returned to England but found it exceptionally difficult to find work so began singing in public houses. His profession eventually brought him to Grimsby where he settled and worked as a fisherman. However, he ended up in court on 15 November 1912, after stealing a pair of boots, he pleaded guilty and received a one-month prison sentence with hard labour.[42]